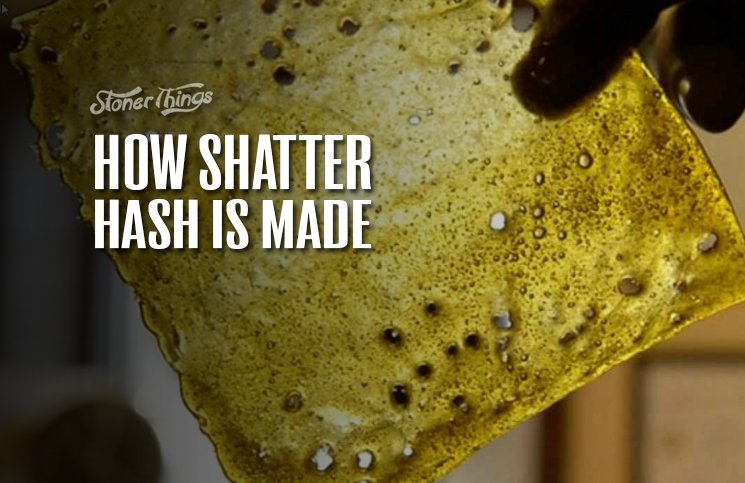 Shatter hash and similar concentrates are growing in popularity and are actually becoming one of the fastest-growing areas of the marijuana industry, especially in Colorado. Despite this, there’s still a lot of controversy surrounding shatter concentrate. Why? Because it’s dangerous to produce, and is a very potent way to ingest THC.

The controversy isn’t stopping people from seeking out shatter, though. In fact, it turns out that people are willing to pay a lot for shatter. In some areas, shatter can cost upwards of $40/gram. When you consider the fact that gold sells for about $43/gram, you can see how much some people value shatter. But why?

So, how do you make shatter hash?

There’s a quick and easy method that anyone can try at home. For starters, you want to take some low-grade hash and toss it into a small mesh bag or empty tea bag. Smooth it out with your fingers and then de-wax the hash with a hair straightener.

How? It’s simple. Simply heat the straightener up to medium heat.

Next is the pressing phase, and it’s very important not to skip it. To press the hash, wrap the mesh bag of hash in a sheet of parchment, then press the heated hair straightener on the parchment-wrapped mesh bag filled with hash, about 2-3 times for 3-4 seconds each.

Make sure you don’t overheat it. You don’t want to burn off the trichomes, nor do you want to see a small cloud of smoke. You want to utilize the heat to mechanically remove the waxes from the hash. If you’re in doubt, a good rule of thumb to follow is to apply additional pressure, not heat.

If you follow these steps, you’ll end up with some clean, high-quality shatter hash. Enjoy!