With the widespread legalization of marijuana having taken effect in 22 states all over the U.S., much has been made of the medical benefits of the plant. Having shown tremendous promise for easing nausea, relieving pain, inducing sleep, and stimulating appetite, marijuana is also thought to be beneficial for treating or at least easing the symptoms of various diseases and health conditions. 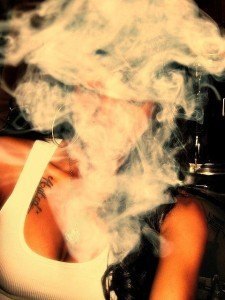 Despite all the potential benefits of marijuana, it is important to realize that using it does entail certain health risks. In particular, smoking marijuana can cause a number of significant health problems…some theoretical and some actual. Keep in mind that smoke is smoke, and despite studies that show the relative safety of marijuana smoke compared to tobacco smoke, it can’t be too healthy to inhale large amounts of it on a regular basis.

Smoke is one thing, but the implements you use for smoking can actually introduce other, more toxic elements as well. Pipes and even rolling papers can cause you to inhale substances that aren’t in the marijuana smoke to begin with.

Let’s start off with rolling papers. Given the health conscious nature of many marijuana smokers, manufacturers have now begun producing rolling papers made out of much safer materials than before. However, traditional rolling papers still do exist, and the dyes and flavorings they contain may pose a health risk when inhaled. The risk may be minimal to be sure, but it does pay to be aware of them.

Even relatively safe wood pipes can be risky. When treated with varnish or some other type of finish, they can release harmful toxins when heat or flame is applied to them. When inhaled into the lungs along with the cannabis smoke, these toxins may cause serious health risks over time. If you must use a wooden pipe, it is advisable to use pipes made from untreated wood.

Some types of metal can be particularly risky as well. Brass and copper pipes are particularly suspect, but the good news is that you don’t see too many of those around nowadays. Aluminum is also quite risky when used as a smoking implement, and it has even been linked to the inset of Alzheimer’s disease.

So what option is available for the smoker who wants a safer smoking experience? Apart from opting for safer woods and metals and avoiding rolling papers altogether, the best possible option would be to use glass. Totally inert, glass does not give off toxic substances when burned. It can also resist remarkably high temperatures, which makes it a great choice if you want to avoid the soot and charred surface that results from smoking from a wooden pipe.

All this is not meant to discount the health benefits of marijuana. Although much research still needs to be done in order to confirm some of these benefits, there is no denying that marijuana does have tremendous promise. Nevertheless, it is important to take the smoking implements we use into consideration. By avoiding the risky implements, the risks may be reduced and the health benefits may be realized.