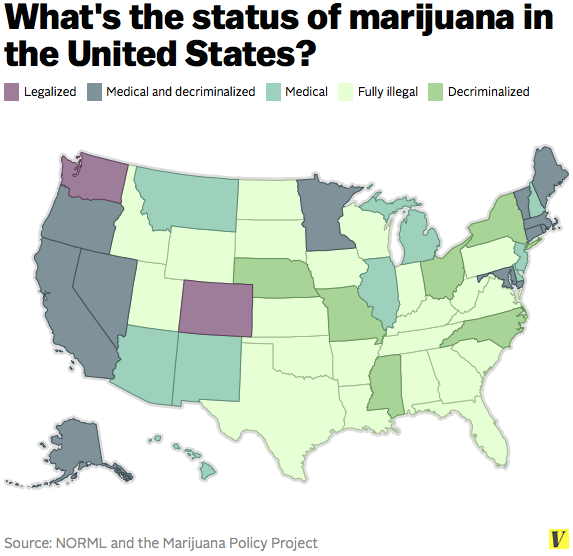 Who smokes the most weed in America? Is it Colorado? Washington? California? Would you believe Rhode Island? 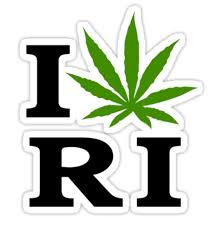 The nation’s smallest state smokes the most marijuana per capita, according to a report by The Washington Post. Thirteen percent of Rhode Island residents over the age of 12 said they used pot in the month before the Substance Abuse and Mental Health Services Administration surveyed them.

The data, collected in 2011-2012, comes from the most recent National Survey on Drug Use and Health.

The survey ranks Alaska as the second-most weed-happy state in the country, with just under 13 percent admitting to toking in the past month. The drug is effectively decriminalized there, as it is in Rhode Island.

Kansas had the least cannabis consumption, with just 4 percent using in the last month. Utah was second-to-last at 4.4 percent.

Surprisingly, Colorado is only No. 7, while Washington is No. 8. Both those states legalized recreational weed in the 2012 elections. The first pot shops opened in each state this year.

Nationwide, about 7 percent of Americans over 12 years old say they used cannabis during the past month. On average, people living in Western states are most likely to use weed, with 9 percent acknowledging use. The Northeast is close behind, and the South has the lowest rate, less than 6 percent.

Rhode Island allows medical marijuana, as do 22 other states (including Washington and Colorado). All of the top 19 states in the survey have adopted medical weed laws, though patients in three of those states don’t yet have access to the drug. 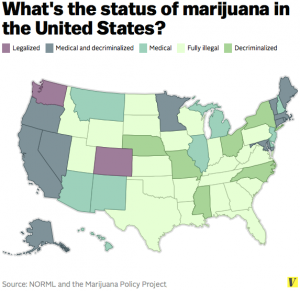 The discrepancies between states are large. In Alaska, for example, about 11 percent of residents over 26 used within the last month. In Utah, slightly less than 10 percent of residents between the ages of 18 and 25 toke. That means older Alaskans smoke more dope than college kids in Utah.

Alaska could vote to legalize recreational marijuana in November, joining Colorado and Washington. Oregon is also likely to approve a legalization initiative. That state ranks fourth in the survey, with more than 12 percent using weed.