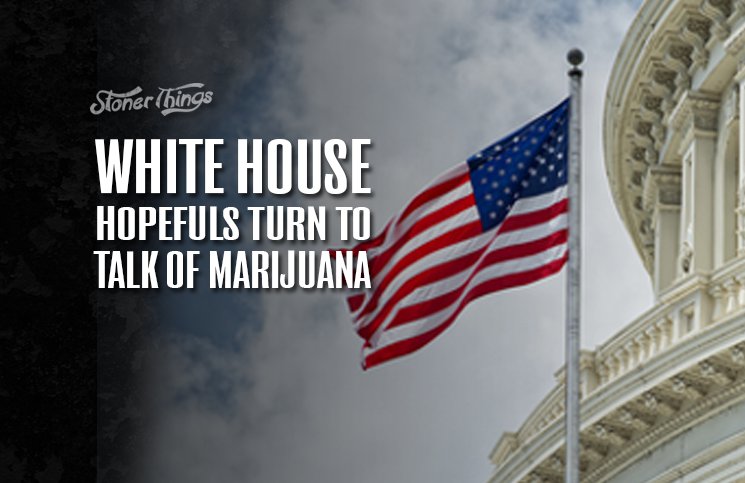 Once upon a time, mention of marijuana in America’s highest political circles meant only one thing: more penalties. Mandatory minimum sentences, massive fines, damaging criminal records – these were the inevitable end result of any sustained national conversation on weed. 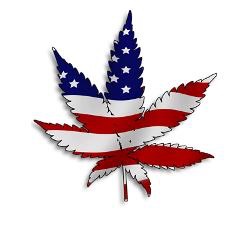 No longer. After decades of shame and legal restraints, marijuana is leaving the shadows on Capitol Hill. It’s already a central topic in the 2016 presidential election, and its relevance is only likely to grow.

Where once politicians viewed cannabis strictly as a matter of criminal justice, the talk in recent months has turned to reform, legalization, and improved medical access to marijuana. Such topics were unthinkable in a national election just 10 years ago.

It is now common for presidential candidates to take campaign donations from the newly legal pot industry. One of them, Rand Paul, even spoke at a marijuana trade show in June.

Even in conservative circles, serious discussion is underway about reforming the justice system, which is plagued by overly aggressive prosecutions and overflowing jails. These are the same Republican candidates who long touted the anti-cannabis policies of the Reagan era.

“When I was growing up, it was political suicide for a candidate to talk about pot being legal,” said Tim Cullen, owner of Colorado Harvest Co., a chain of legal pot shops.

No serious candidate has yet staked a positive position on full legalization. But Hillary Clinton, the Democratic frontrunner, has said she supports medical marijuana, while other candidates have also offered support for MMJ.

Cullen met Clinton at a fundraiser in New Mexico in June, he said. They talked about her position on legalization.

“She’s not outwardly hostile to the idea, which is a big step forward,” Cullen said. “She’s willing to openly talk about it, at least.”

Other candidate positions run the gamut from near-support for legalization (Paul) to outright hostility toward the idea (Chris Christie). Some, like Christie, have threatened to end legalization should they win office, but they are quickly becoming the exception, not the rule.

None of this means weed will be legal from coast to coast by 2017. Nationwide support for full legalization hovers at about 53 percent, and that narrow margin may make some pols uncomfortable with full-on reform, at least for now. 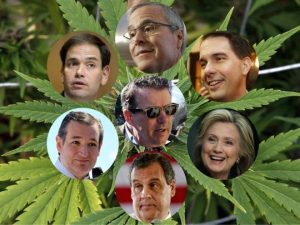 But public opinion on the matter is clearly trending upward, and is likely to continue doing so for some time. Realizing this, more and more candidates are trying to stake ground on the subject early.

On the GOP side, Jeb Bush, Rick Perry, and Ted Cruz all say legalization should be a question for the states. They oppose federal reform and say legal weed is a bad idea. Bobby Jindal says he supports reform, but only the kind that reduces setences, not the kind that makes pot legal.

Christie and Rick Santorum, also a candidate for the White House, both openly oppose legalization and vow to fight it. Meanwhile, Paul is the only openly pro-cannabis candidate on either side of the aisle. And even he tries to avoid overt connections to the weed industry.

Democrats are also watching their steps on the subject, though they’re generally more supportive. In addition to Clinton, who said “there should be availability (of MMJ) under appropriate circumstances,” Bernie Sanders says he supports decriminalization but not full legalization.

Even the lukewarm backing is huge progress, said Rob Kampia, executive director of the Marijuana Policy Project. The MPP is a major national proponent of legalization and a prodigious part of the marijuana lobby.

“We wouldn’t have heard a presidential candidate talking that way four years ago,” Kampia said.