Everyone who’s picked up a pipe or a joint more than half a dozen times knows the names by heart: Sour Diesel, Green Crack, AK-47, Pineapple Express.

If booze sells by the label, marijuana sells by the strain. A good name can evoke head trips, body highs, skunk aromas, fruity tastes and much, much more. And when you get an ounce of Raspberry Kush, you’re getting the same rush you’d get if you bought it halfway across the country. Right? 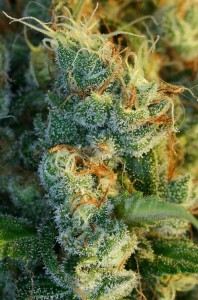 Not so much, says one California marijuana expert. If you think strains are the same everywhere you go, if you think the name of a strain guarantees effect, or if you think the people who grow these products observe some universally accepted quality controls, you’ve been had.

Jeffrey Raber, who has a Ph.D in chemistry from the University of Southern California, told LA Weekly he’ll soon release a study showing pretty much every assumption about the “great” strains is bullshit.

The names that supposedly signify something important about a strain or its history? They usually have no bearing on the plant at all, Raber said. In fact, when you buy a bag of OG Kush, you’re as likely to get a bag of something you once knew as something entirely different.

“Most people don’t even know,” Raber said. “We took a popular name, Jack Herer, and found that most didn’t even look like each other. OG whatever, Kush whatever, and the marketing that goes along with it – it’s not really medically designed.”

That doesn’t mean you’re getting lousy weed. If you’re buying from a decent source and it feels like it’s doing the job, you bought a good strain. Raber’s point is that the name doesn’t mean squat. It’s just a marketing tool, and it’s no more likely to be accurate than blindly labeling a bottle of clear liquor Stolichnaya.

In fact, Raber says, his study will show the two most enshrined biological concepts behind weed, indica and sativa, are bogus constructs. As any pothead could tell you, indica will put you to sleep while sativa will give you a boost.

Not so, Raber said. The only real difference is in the appearance and structure of the plants.

“The data shows that indica and sativa is just morphology,” he said. “It’s a misperception that indica will put you to sleep or that sativa is more energetic.”

Raber provides testing for MMJ dispensaries through his company, the Werk Shop. His study, which he hopes to release in the spring, looks at more than 1,000 strains of marijuana sold at pot shops.