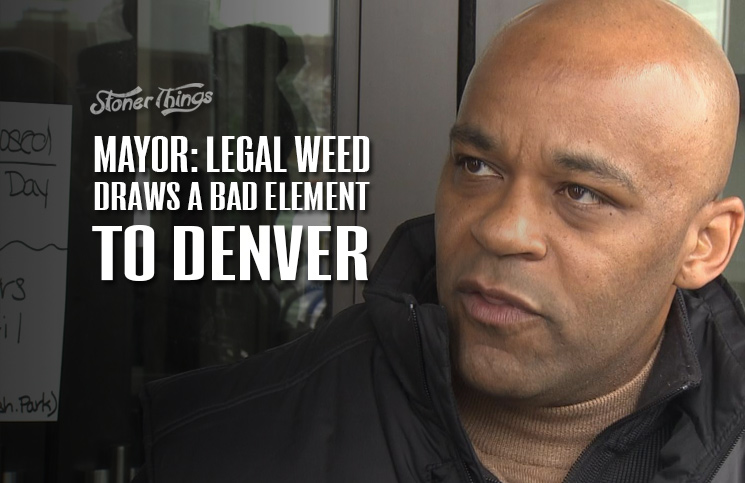 “This is one of the results of the legalization of marijuana in Denver, and we’re going to have to deal with it,” Hancock said.

Several violent incidents have been reported on the city’s downtown mall, a popular public gathering spot where open marijuana use has long been commonplace. There was no evidence the drug had anything to do with any of the attacks, let alone any of the shops that sell it.

Yet Hancock insisted the violent incidents were almost entirely the result of cannabis abuse – an unlikely explanation, as pot has never been shown to contribute to violence. In fact, numerous studies on the subject have come to exactly the opposite conclusion, that cannabis can calm aggression.

In Denver’s latest attack, a man was caught swinging a large length of PVC piping at passersby in front of a fast-food restaurant near the mall. A witness posted a video of the incident online.

Denver Police Chief David Quinones told The Denver Post Seeley may have been involved in at least four other incidents, all of which occurred within minutes of the pipe attack. Officers arrested him after responding to a 911 call about a man “acting up” in front of a McDonald’s.

Several minor injuries were reported, but none of the victims required medical attention. One suffered a small scalp laceration, while others left the scene before police arrived. Quinones asked those victims to call the department and relay what they saw.

The attack came just two weeks after a similar assault on the mall, an incident that was also captured on video and posted online. The video appeared on a local news broadcast, and four suspects were arrested and charged.

Increased security around the mall

Police said in July that they and the Downtown Denver Partnership are working together to increase security on the mall by increasing police patrols and hiring private security guards.

Denver Police Chief Robert White pointed to pot shops in the area and implored to stop selling single pre-rolled joints. But police offered no proof that cannabis had anything to do with any of the violent incidents. Quinones said it wasn’t clear whether Seeley was high on any drug or experiencing a mental health episode.

But the mayor said he has talked directly to alleged “urban travelers” who admitted they came to Denver for the legal weed. He called them a “scourge of hoodlums” without offering any proof that they had any connection to the recent assaults.

What do you think: Are there really “hoodlums” smoking marijuana and attacking passersby in Denver, or are authorities imagining things? Comment below.