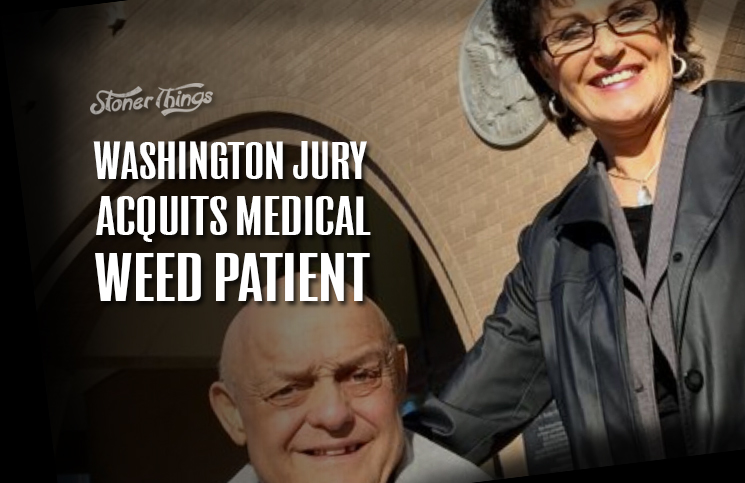 This time, it was the family of medical weed patient Larry Harvey, 71, a hero of the MMJ movement. A jury in Washington State delivered a not guilty verdict on most charges in the trial of Harvey’s wife, Rhonda Firestack-Harvey, 56; their son, Rolland Gregg, 33; and Gregg’s wife, Michelle Gregg, 36.

The three registered patients, who insisted they obeyed state law while growing MMJ at Harvey’s home, were convicted on just one count, a charge of growing fewer than 100 cannabis plants.

Unfortunately, they could still be sentenced to several years in prison. But this is much less severe than the decades they originally faced. Despite the conviction, pot proponents praised the verdict as a sign of things to come.

“The Department of Justice didn’t get the message from Congress and the president, but today they got the message from the jury, and the message is that there’s not a jury in the state of Washington that will convict people of medical marijuana,” said Kari Boater, coordinator for the Washington office of Americans for Safe Access.

Federal agents raided Lee Harvey’s home in 2012 and arrested him and his family for growing dozens of cannabis plants. The family said they grew within the limits of state law, a point the feds chose to ignore.

Indeed, the federal judge in the trial barred Harvey or his relatives from arguing medical necessity. That meant they couldn’t even bring up their legal status as patients during the trial – or mention anything about medical weed.

This made the trial a major hurdle for Harvey and his family. Eventually, prosecutors dropped the charges against him because his cancer could kill him at any time. But they refused to drop charges against the others.

A family friend was also charged and pleaded guilty last year to undisclosed marijuana charges; he faces roughly 16 months in prison. The Harvey family, on the other hand, refused to capitulate to prosecutors. The gamble paid off.

And this verdict could be a sign that the tidal wave of marijuana reform sweeping the states has reached the court system. If juries continue to acquit defendants, the government will hopefully get the message that times have changed and American life will never return to what it used to be.

A jury in Florida made exactly that point in late February by acquitting a patient of growing weed. The man, Jesse Teplicky, testified at trial that he had smoked a joint that day to treat his nausea and anorexia nervosa, but the jurors found him not guilty anyway. It was the first such verdict in Florida history.

Congress enacted a law late last year that was supposed to prevent exactly this kind of prosecution by blocking the Department of Justice and its agencies – including the DEA – from interfering with medical weed in states where it’s legal.

Earlier, the Obama administration issued guidelines to U.S. attorneys, designed to stop the torrent of federal charges against legal marijuana users. Sadly, many of those prosecutors haven’t received the message.