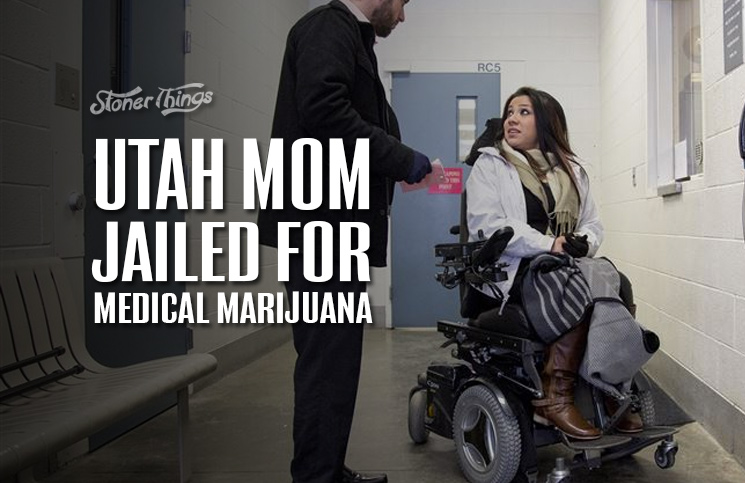 A mother who recently moved from Utah to Colorado so she could use medical marijuana was forced to return to Utah in December so she could be jailed on a misdemeanor possession charge.

Enedina Stanger was booked into the Weber County Jail in Utah on Dec. 28. She and her husband, Michael Stanger, had recently moved their family to Colorado so she could legally access the medicine that treats her Ehlers-Danlos syndrome. She has a rare form of the disease that causes nerve pain and affects joints, skin, and blood vessels.

“I have a lot of muscle spasms, my tendons are shredding because I dislocate so much,” Enedina Stanger said. “I’m getting electrocuted all the time my nerves, my joints will pinch my tendons or pinch my nerves, then I can’t feel my arm.”

Only marijuana has succeeded at reducing her pain, she said.

Cannabis is the only effective medicine

“There’s nothing that can help that pain except for cannabis,” Enedina Stanger said. “It just relaxes the muscles and takes away the nerve pain, and I can’t explain it, I don’t really know, for me it was just a miracle, we had just been praying for something that could help me because all of these pills weren’t working.”

Both of her daughters have the same condition, and Enedina Stanger said she has vowed not to let them become “a science experiment.”

Stanger arrested for smoking in her car

Enedina Stanger was arrested in October, when a witness called police and complained that she was smoking cannabis in her car outside a store. She originally faced a felony charge of child endangerment, even though her children were inside the store when she smoked.

“When we found out that they were going to charge her with child endangerment, we knew that that meant child protective services would get on the case, and the whole reason she uses cannabis in the first place is to help her be able to be a mom with the condition she has, any of the drugs that was offered by doctors would basically make her a zombie,” Michael Stanger said.

Unfortunately, as is often the case, prosecutors were able to use the felony charge to coerce Edenida Stanger into pleading to a lesser misdemeanor charge. She pleaded to possession of marijuana in a drug-free zone and was sentenced to six months of probation and a mandatory parenting class.

Certain forms of medical marijuana are technically legal in Utah, but not practically. Lawmakers are discussing proposals that would fully legalize MMJ, but conservative opposition is intense, and real reform is unlikely to pass anytime soon.