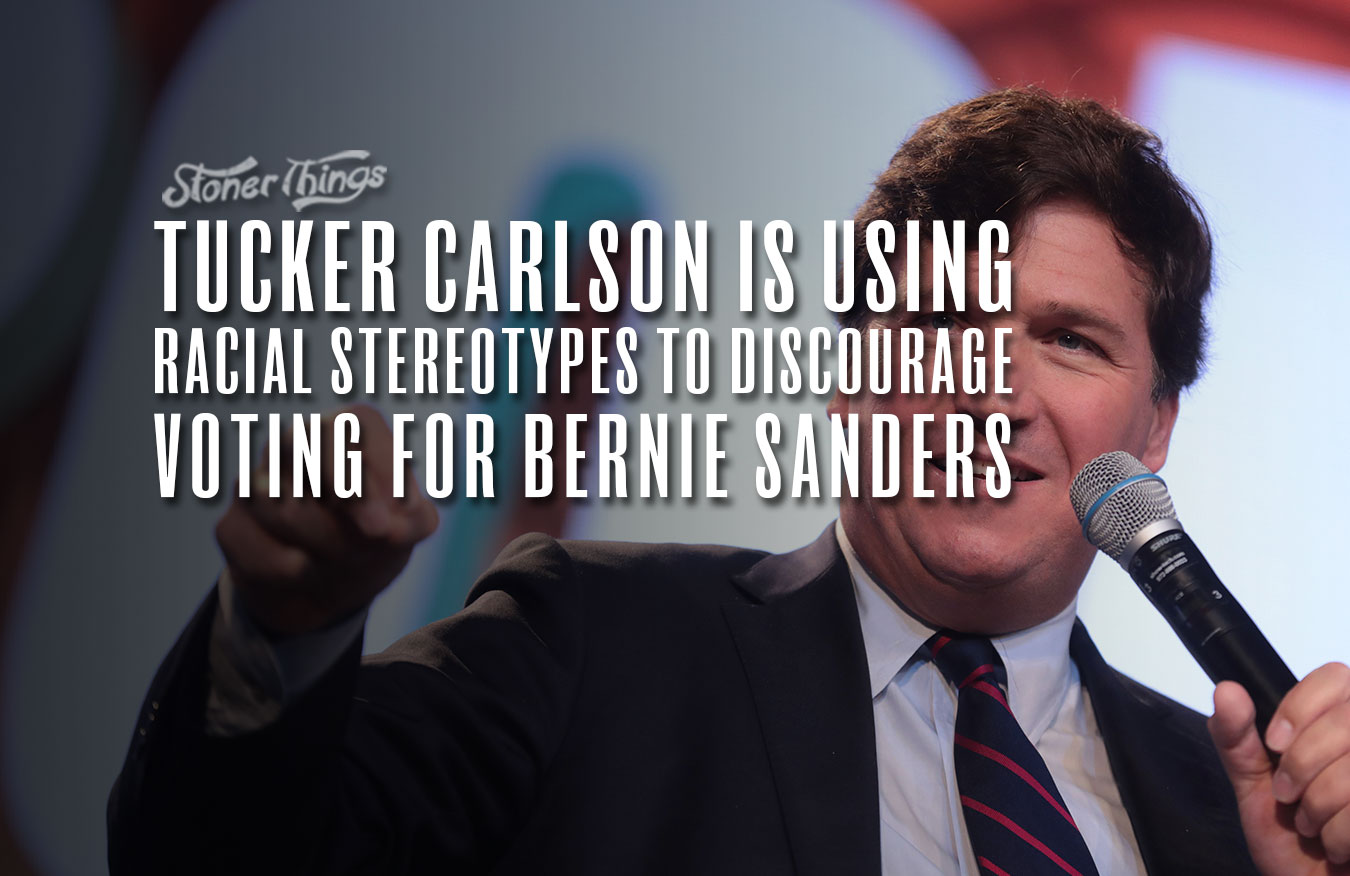 Bernie Sanders has been very clear on his stance around the Drug War, and really about every war. Sanders has been anti-war since at least the Iraq War, one of the few Senators to actually oppose it. The U.S. Drug War isn’t much different, but is also tinged with racism. People of color are disproportionately incarcerated for using drugs, especially marijuana. Studies have frequently shown that cannabis use is most prevalent among whites, and legalization has continued that trend in many places. So it’s disappointing when a media pundit like Tucker Carlson spews tired, racist stereotypes about who smokes and who sells weed. But that’s exactly what happened as he commented on Sanders’ debate performance in February.

On his primetime Fox News show, Carlson said, “Oh, the war on drugs! Bernie Sanders talks about that in every speech he gives. A declining country with a sad underemployed middle class obviously needs to smoke a ton more weed. That’s Bernie’s solution…Fire up a bowl. Numb out. Maybe you won’t notice.” That’s not the racist part, just the misinformed one. Aside from the recent explosion of unemployment claims due to coronavirus, the U.S. has had a ton of employment, but the way stats are collected by the Department of Labor is flawed, say some. Many people still have to work multiple jobs to pay bills because costs have risen far beyond wage growth. Also, Sanders obviously isn’t suggesting that the solution to our problems is to “numb out” — which is patently ridiculous. Never mind people who are perfectly productive when they smoke, of course.

No, Carlson got into Reefer Madness territory when he conflated a few items. Saying that weed will come from “black people” who will happily sell it. Back in reality, the legal weed boom has largely locked out the black community. Early efforts at legalization put terms on owning an operation that included having a prior drug record. Well, it’s sort of crazy to be denied a business license to sell legal weed if, back in the day, you got busted for illegal weed, isn’t it? Luckily a few states have realized this error and are making efforts not only to expunge records of those low-level drug busts, but also to offer incentives and opportunities to minorities looking to cash in on cannabis.

But that, too, was mocked by Carlson. Almost unbelievably he made the jump from the stereotypical street weed dealer in a poor neighborhood to this diatribe: “So first, they fill black neighborhoods with abortion clinics. Now the frontrunner is encouraging more black kids to sell drugs, but somehow this is the party that loves black America.” Well, yes, Tucker, in states where weed is legal why not allow people to sell? Also, abortion is still legal but Sanders has not advanced any plans to “fill black neighborhoods” with abortion clinics (despite the fact that proper access to healthcare actually reduces the rate of abortion).

Sadly it’s on-brand for Carlson to make outrageous statements grounded in antiquated thinking and outdated information. Considering the vast majority of Fox News viewers agree cannabis should be legal, perhaps that show didn’t hit quite as hard as some of his other rant-fests. For Sanders’ part, his plan is to legalize weed immediately, and expunge records of people who were busted with it. It’s entirely possible that he would enact measures to entice minorities to participate in selling marijuana, yes, as opposed to what Carlson suggests, which is letting “a few corporations” control the entire market.