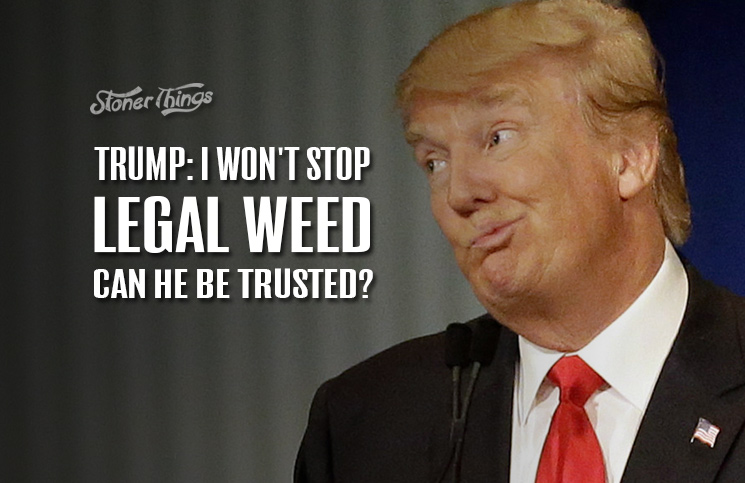 During an interview in July, Trump told Denver TV station KUSA he “wouldn’t do that.” He was answering a question from reporter Brandon Rittiman about the contradictory position taken by campaign surrogate and New Jersey Gov. Chris Christie.

Christie, a former prosecutor, ran against Trump in the primaries but dropped out this spring. He vowed during his campaign to use federal anti-marijuana laws to block new states from enacting legalization and stamp it out where it already exists. The governor is widely considered the leading contender to become Trump’s attorney general, a job that would put him in a position to crack down on legal cannabis across the country.

Christie vowed to stamp out legalization

“If you’re getting high in Colorado today, enjoy it,” Christie said last summer. “As of January 2017, I will enforce the federal laws.”

Rittiman noted the conflicting positions during the interview, pointing out that Christie was “the only presidential candidate who was campaigning saying he would use federal authority to shut down sales of recreational marijuana in states like Colorado.”

“You wouldn’t let him do that?” Rittiman asked.

“Even if you picked him as A.G.?” Rittiman asked.

How would Trump approach federal reform?

The interview didn’t answer a few key questions, however. For one, Trump didn’t provide any details about what, if anything, he would do to further reform at the federal level. It would be nearly impossible for the DOJ to shut down legal pot in states that have adopted it, making his stance on federal legalization more important than his position on states’ rights.

The greater problem, though, is that Trump is notoriously slippery on almost every political subject. He changes his mind on major policies almost daily and has offered conflicting views on legalization. In the 1980s he supported legalizing all drugs; now he sometimes says he supports legal marijuana while at other times saying it would be a bad idea to allow even that.

In other words, there’s no way to know whether Trump would really allow more states to legalize, let alone whether he would push for federal legalization. And that’s bad for reformers and voters who prefer practical solutions to vague promises.

Let us know: Do you think Trump would legalize marijuana? Can you trust him if he says he will? Leave a comment below.