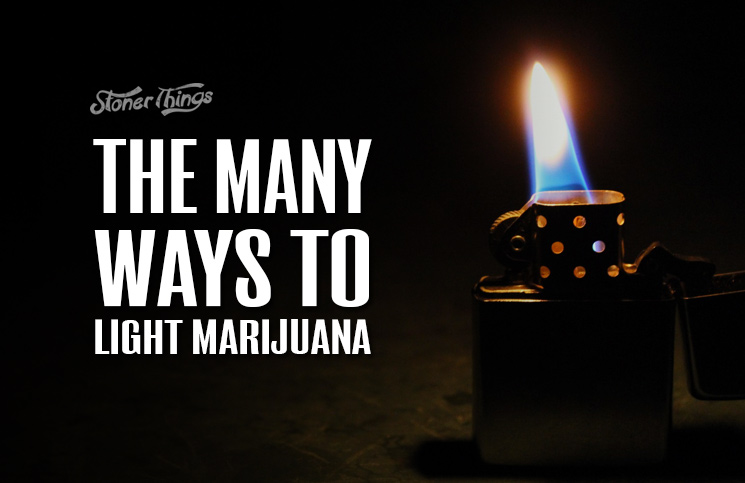 Marijuana reform has brought new methods of using the drug into the public spotlight. Edibles, hash oil, vaporizers – all are non-traditional ways to consume cannabis, and all are increasingly popular.

But most stoners still appreciate the appeal of a hot, burning bowl of weed. There’s just something about fire and marijuana that goes together. So here are a few of the many ways to set your favorite plant aflame.

Most people prefer to light their pot with, well, a lighter. But sometimes the primitive approach works just as well. All you really need, after all, is an ignition source and something to keep the flame alive until it reaches your cannabis.

Enter the simple kitchen match. Avoid gas station matchbooks, as their flimsy stems will likely burn up before you manage to get a good cherry going. A long kitchen match works best. If even that isn’t available, you can simply roll up a tube of paper or index paper, hold it to your gas range, and then use it as a match – but watch out that you don’t start a real fire!

Bic brand lighters dominate the disposable market, so if you’ve ever smoked weed or lit a cigarette, it was probably with a Bic. These lighters have the benefit of being small (sometimes downright tiny), and of course you can throw them away when you’re done.

But that also means you have to replace them. If you’ve ever tried to toke at 4:20 a.m. only to realize your last Bic is empty, you know the pain this can involve. Still, as convenience goes, there’s no better way to keep the marijuana smoldering.

Again, there is one brand above all others when it comes to refillable lighters: Zippo, a classic accessory for any pothead with a few extra bucks. They’re small, they’re efficient, and they always look cool (unless maybe you buy one with a Confederate flag stamped on it).

There is a downside, however, in that Zippos are not especially easy to refill. Not hard, exactly, but it can take a bit of practice. Plus, you have to keep the right fuel on hand; some lighters use butane while others, such as Zippo, run off lighter fluid.

Now we’re getting fancy. These high-end devices quickly heat a metal or ceramic filament that is then used to burn marijuana, whether in a joint, a bowl, or some other smoking device.

It’s an open question why anyone would turn to a heating wand when a Bic will do the job just as well. But some stoners like to take an expensive approach to everything, so there’s obviously a market. Even so, don’t spend money on this method unless you have money you don’t need.

If you don’t have the cash to spring on an herb iron, there’s no way you’re ever starting your joint with a laser beam. Maybe if you work in a lab, but even then you’d have to sneak the weed in and toke it without getting caught. That’s a tall order for any scientist.

Still, being able to say you lased your way into a pleasant high might be worth the risk. Just make sure to grab a selfie – no one will believe a word you say.