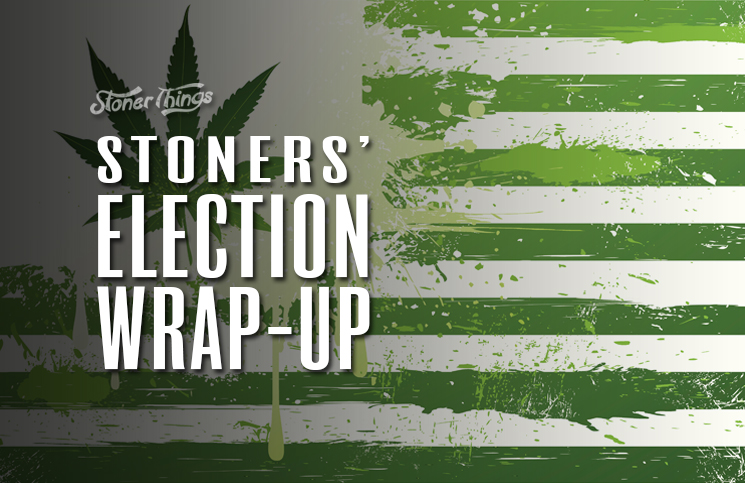 We won some and we lost some this Election Day. Actually, we lost one and won everything else. It was, indeed, a very big day for marijuana reform across the country.

Two new states voted to legalize recreational marijuana: Oregon and Alaska. That brings the total number of states where pot is legal to four, including Washington and Colorado.

At the same time, voters in Washington, D.C. legalized pot by a wide margin. That vote could be in jeopardy, though, since Congress has the power to overturn local District laws.

There was one big defeat on Nov. 4: Florida rejected a medical marijuana amendment. Most Floridians supported the measure, but not the critical 60 percent needed to enact it.

Oregon’s new law will allow residents and visitors over 21 to carry up to an ounce of weed in public. Oregonians can also keep up to eight ounces at home and grow up to four plants, making this the most liberal legalization policy passed to date.

In Alaska, residents and visitors over 21 will be able to possess up to an ounce and grow up to six plants at home. Residents were already able to possess up to four ounces at home under a state Supreme Court ruling from the 1970s, but now legal cultivators and sellers will supplant the underground market.

On the other side of the country, meanwhile, a whopping 70 percent of D.C. voters passed a marijuana legalization measure. The ordinance allows adults over 21 to possess up to two ounces and grow up to six plants on private property.

That policy could be overturned by Republicans in Congress now that they control both houses. Some House members have threatened to do so, including Rep. Andy Harris of Maryland, whose congressional district neighbors D.C.

It’s not clear whether that will happen. President Obama must sign any such legislation, and he could alienate Democrats in the District if he were to do so.

The one big loss of the day came in the Sunshine State, where 58 percent of voters backed medical weed. That wasn’t enough to make the proposal law, however. This marks a setback for the future of pot in the Deep South, but may not reflect any national trends.

Several communities in Michigan rejected legalization, but several others approved it. Michigan is now the centerpiece in the local fight to legalize marijuana one city at a time.

Overall, it was a landmark moment for weed. And it bodes extremely well for the future of reform across the country.

Several more states could vote for legalization in two years, including California, Arizona, Nevada, and Maine. Other targets for the near future include Rhode Island, Massachusetts, Delaware, Connecticut and New Mexico.

Presidential elections typically draw a much younger pool of voters than midterms. That means 2016 is likely to see a new wave of pro-legalization voters who will almost certainly propel a few states to victory.