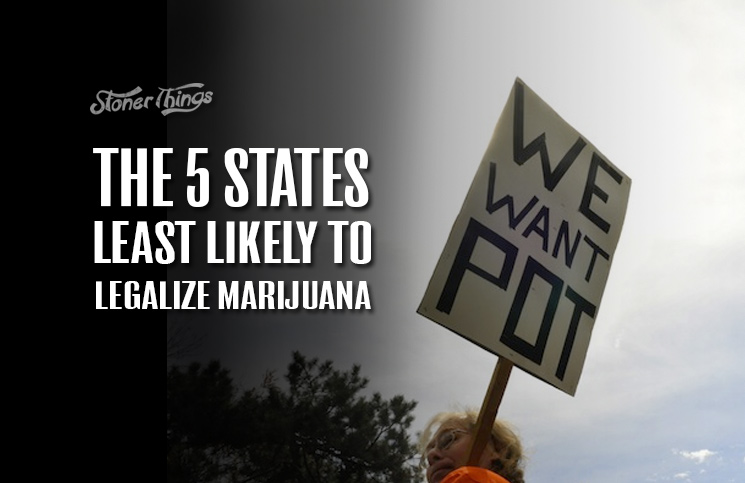 Here’s a list of the five states that stand the least chance of adopting legal cannabis by 2020 or 2024. Not surprisingly, they’re all conservative, they’re all Republican, and they’re all located in the South, the Midwest, or the Mountain West. Here they are, in descending order:

Marijuana is illegal for any use in Alabama, even non-psychoactive medical treatments. The state also has one of the lowest rates of cannabis use: Just 9.7 percent of adults use the drug, compared to a national average of 12.3 percent. Stringent laws probably keep this rate low, but the low rate itself also probably contributes to stringent laws.

Penalties for minor pot offenses can be massive. Any possession is a misdemeanor on a first offense and a felony on subsequent convictions. Penalties can top out at five years in prison and $6,000 in fines, and a high arrest rate – 74.7 people per 100,000 are busted each year – also likely slows reform.

Activists are pushing to get legalization on the ballot in Arkansas, and they might succeed – if not in 2016, then in 2020 or 2024. But even then, this deep-red state is unlikely to make cannabis legal.

Unlike many conservative states, Arkansas prohibits even non-psychoactive medical marijuana for severe seizure disorders. Hemp oil contains CBD – the active chemical in these preparations – and is widely available, but it has little proven effect for patients. A previous effort to legalize full medicinal cannabis failed at the ballot in 2012, while a 2014 campaign to legalize the drug for recreation never even made it that far.

Georgia does allow CBD oil for epileptic patients, but it’s nearly impossible to get. State law still bars any marijuana cultivation or processing, including CBD, leaving patients no choice but to buy their medicine in another state and bring it home. Crossing state lines with marijuana is a federal crime, so patients merely swap one legal risk for another.

Georgia’s marijuana arrest rate is significantly higher than the national average: 309 busts per 100,000 people versus 239 per 100,000 nationally. And penalties for even minor possession are unusually harsh, with frequent jail sentences and large fines, more evidence the state isn’t moving toward legalization.

Several Western states support legal cannabis, including Colorado and Nevada, but a few do not – especially Idaho and Wyoming. Of the two, Idaho is the less likely to adopt reform in the next few years. Minor possession carries a top sentence of a year in jail and $1,000 in fines, and local potheads are few and far between.

Even medical marijuana is illegal in Idaho. The state Legislature passed a bill this year that would have legalized CBD treatments, but the Republican governor vetoed it. All factors considered, the Gem State will probably keep cracking down on stoners for the time being.

This is another red state that will never be on the vanguard of marijuana reform. Possession of any amount of weed is a misdemeanor on a first offense and carries a maximum penalty of $5,000 in fines and a year in jail. Public support for legalization is strong, but state Republican politics make that degree of reform unlikely.

In fact, the Indiana Legislature moved in the opposite direction earlier this year, passing legislation that would have increased penalties and enforcement for marijuana crimes. It didn’t make it past the governor’s desk, but it signaled that Indiana residents will have to wait a long time before pot shops start opening across the state.

Tell us: How likely is your state to legalize pot in the next few years? Where do you live?