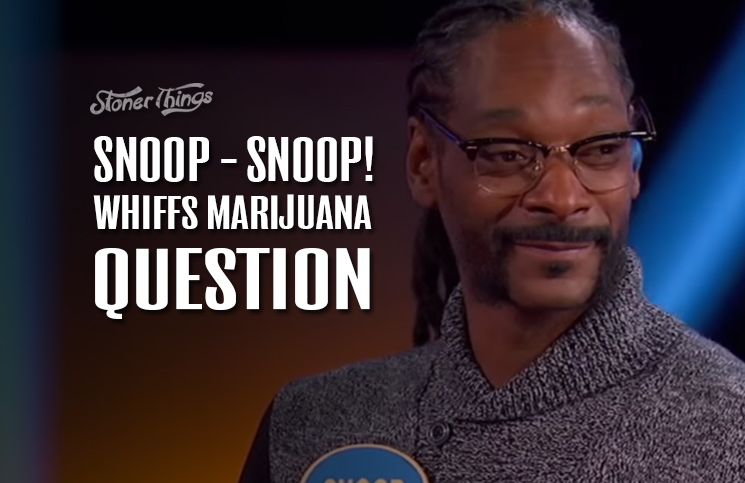 Snoop Dogg made an appearance on Steve Harvey’s Celebrity Family Feud, and though he got a softball to beat all softballs, he whiffed. What’s worse, it was a question about weed. We know, right?

If that’s hard to believe, the video exists to prove it. Snoop may be the ultimate spokesman for all things marijuana, but even he has bad days, apparently.

The video is a preview clip for a July episode starring Snoop, retired boxing legend Sugar Ray Leonard, and their families. The two showed for a Family Feud celebrity episode, one of Harvey’s efforts to wring more laughs out of the show.

But sometimes the celebrities don’t do so well, as Snoop learned the hard way. Famous people tend to live in a bubble, Harvey has noted in the past, with minimal understanding of the show’s working-class audience or how “normal people” live.

Snoop jumped at the word ‘marijuana’

That wasn’t actually Snoop’s problem. Frankly, he just caught a bad break. It came as he was facing Leonard at the buzzer. The question: “Name something Grandma might do if she caught Grandpa smoking marijuana.” As soon as Snoop heard the word “marijuana,” he jumped.

Harvey was impressed the rapper beat Leonard, a champion welterweight famed for his speed and agility. That’s how important pot is to Snoop.

But because he reached the buzzer first, Snoop had to give the first answer. If he got the top response on the board, he would win the round. But if he missed, Leonard would have a chance to score that answer. Snoop missed.

Grandma, he guessed, would hit grandpa if she caught him toking weed. We’ll let others decide what that says about Snoop’s grandparents, but at least the answer rang true. It just wasn’t good enough. As soon as the board turned over, revealing Snoop had picked the No. 4 response, Leonard took advantage of the opening.

Grandma, the boxer said, would instead just scream at grandpa. Definitely a better way to deal with grandpa’s habits, but still a little over the top. Even so, it was enough to give Leonard points for the No. 2 answer and hand him the round. We don’t know yet who won the game.

The face-off didn’t exactly give the world any new insight on pot, legalization, or even Snoop. But it did remind us that acceptance of potheads has spread to some of the fustiest corners of Hollywood. It’s hard to imagine Richard Dawson asking a 1980s housewife how her Nana would react to Grandpa using the icky.

Family Feud first aired in 1976, with Dawson as host, and ran until 1985. He returned to helm a new version of the game show in the mid-1990s. Mac took hosting duties in 1999 with the launch of the show’s third iteration.

We want to know: How embarrassing is it for Snoop that he got a marijuana question wrong? What should he do to recover: smoke a joint, smoke a blunt, or smoke a bowl? Comment below.