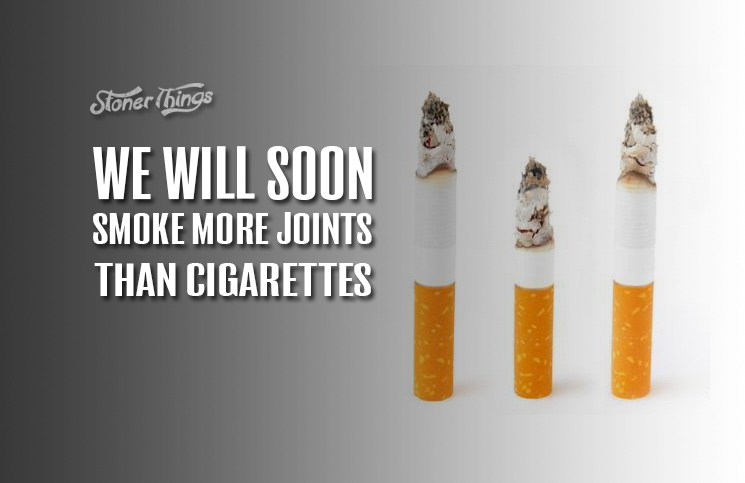 More than twice as many Americans admit they currently use marijuana as compared to just a few years ago, according to a new poll.

According to the Gallup survey, released in August, 33 million Americans say they currently smoke or otherwise consume cannabis, whether for medicine or recreational use. As The Washington Post noted, that number is nearly as large as the population of California and larger than Texas.

In a sign of massive, rapid social change, the number of Americans who use marijuana could soon surpass the number who smoke cigarettes. Roughly 40 million people currently use tobacco products, and that figure is on the decline; if present trends continue, marijuana should pass cigarettes in just a few years.

In 2013, about 7 percent of Americans acknowledged using cannabis, while 13 percent said the same in July 2016. That’s an increase of 86 percent, nearly double. There are several possible reasons for the spike, but recent legalization votes probably explain most of the change.

Voters in Colorado and Washington first legalized marijuana for recreational adult use in 2012, while Oregon, Alaska, and the District of Columbia followed suit two years later. Legalization is already slated for the November 2016 ballot in California and Nevada, while votes are also likely in Arizona, Maine, and Massachusetts.

Legalization took effect in Colorado and Washington in 2013, while the first pot shops opened in those states in 2014. The legal markets there have likely drawn in large numbers of new users, many of whom are using pot instead of alcohol, the Post reported.

But there are other factors, too. The stigma against cannabis use is fast fading in many parts of the country, especially the East and West coasts, and that may be leading to increased consumption. It’s also possible that the receding stigma has simply made it safer for poll respondents who were already toking to admit it.

Support for legalization on the rise

National support for legalization is high and growing: Nearly 60 percent of American adults back the idea in their states, and members of Congress have moved in recent months to advance reform at the federal level. Still, pot remains prohibited for any use under federal anti-drug statutes.

The Gallup poll results reflect this fast-changing reality, proving that marijuana continues to grow in popularity and acceptance. It’s the natural consequence of social progress over the past half-century, with attitudes toward the drug gradually improving over the decades.

The biggest contributing factor to that change may be the simple fact that more people smoke pot now. Marijuana use was still rare in the 1960s and ’70s, even among young liberals with disposable income. Today, almost half of adults have tried the drug at least once. Clearly, many of them enjoyed the experience.

Tell us: Do you smoke cigarettes? Do you think marijuana could help you quit? Leave a comment below.