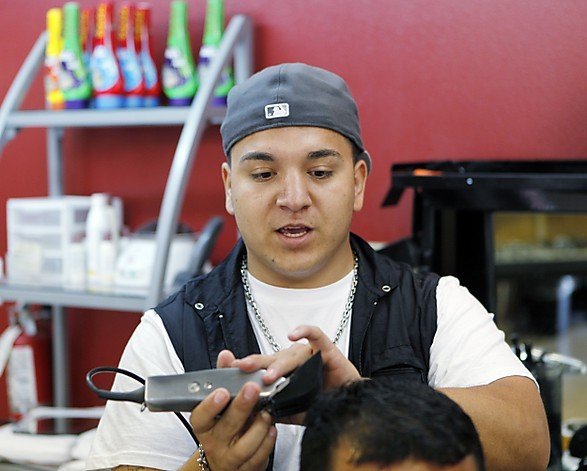 In the 1960s, it was a battle between the long hairs and the squares. Now, apparently, the battle lines are being drawn a little differently.

A barbershop in Greeley, Col. has made waves by refusing to serve customers who smell like marijuana. The owner’s stand has brought cheers and jeers from across town, plus the attention of the national media. 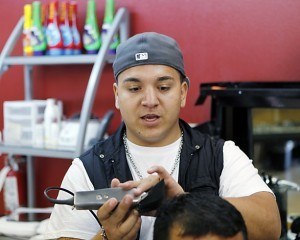 Hugo Corral, the owner of Hugo’s Barber Shop, said he had to take action when smelly customers became too much to bear. They offended other patrons and drove away business, he said.

“I feel that it’s my right to make the statement,” Corral said. “It’s the same thing as no shoes, no service.”

Apparently, he has had to deal with a large number of tokers who came in off the street reeking of cannabis – whether because they had just smoked it or because they were carrying it.

Recreational weed has been legal in Colorado since 2012, when voters approved it at the polls. The first pot shops opened Jan. 1, and legal marijuana has been doing brisk business ever since.

Corral said he’s a supporter of legalization and the weed industry. But the situation was getting unbearable for many of his customers, he said. Many of them bring children to the store and didn’t feel comfortable returning.

“A mother calls and says, ‘Hey, we can’t go in there anymore because we don’t want it to smell like marijuana when my child’s sitting there waiting,’” Corral said.

The decision got the Greeley business owner a mixed response, though he said most of it was positive. Other business owners thanked him for standing up to stinky patrons, and customers have told him it makes a big difference. 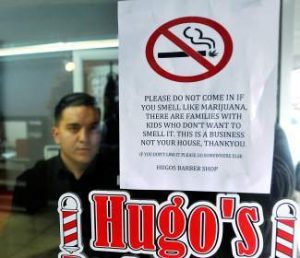 Still, others see it as unwarranted discrimination against people who have done nothing more than exercise their legal rights. Corral said people have trashed his window and threatened to sue him.

“People ripping the sign off,” he said, referring to a notice alerting customers to the new rule. “I’ve had to clean spit off my front door.”

As for the legalities of Corral’s actions, he’s perfectly within his rights. The U.S. Constitution prevents private businesses from discriminating on the basis of race, religion, gender and several other factors. Marijuana use is not one of them, so business owners are largely free to discriminate against stoners.