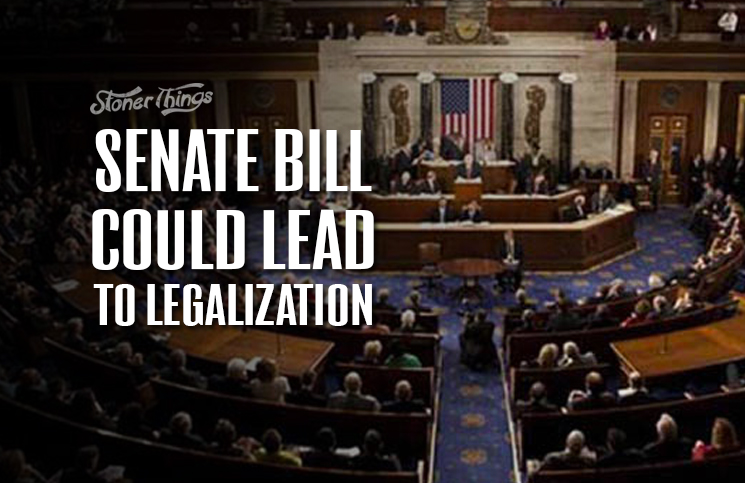 A proposed law gaining steam in the U.S. Senate could ultimately lead to the widespread legalization of marijuana in America.

The bipartisan bill started picking up new sponsors soon after it was introduced in March. Nevada GOP Sen. Dean Heller was the latest as of March 12. The legislation’s growing popularity in the Senate suggests it could be the beginning of the end for the federal prohibition of weed.

The proposed law would cut back the legal ability of the federal government to arrest and prosecute medical pot patients and providers. Its key provision would reschedule cannabis under the Controlled Substances Act.

Marijuana ranked alongside heroin and ecstasy in Controlled Substances Act

That absurdity of a law, enacted in 1970, ranks legally controlled substances by order of how dangerous, addictive, and medically useful the feds consider them to be. Marijuana is currently listed in schedule 1, the most severe category, along with heroin, ecstasy, and mescaline.

Pot advocates have been pushing to reschedule weed for generations, saying marijuana is clearly neither terribly dangerous nor addictive and has proven medical uses. The Senate legislation would move cannabis to schedule 2, which includes cocaine and methamphetamine.

These two drugs are widely considered dangerous and highly addictive, but they also have limited medical benefits: Cocaine is used as a topical anesthetic in eye surgeries, while meth is used to treat attention-deficit symptoms and morbid obesity.

Weed doesn’t belong with those drugs any more than it belongs with smack, but at least a listing under schedule 2 would make it much easier to allow medical marijuana at the state level.

Congress passed a law late last year that already prevents the Department of Justice from using federal funds to target MMJ in states where it’s legal. But several U.S. attorneys continue to prosecute patients and providers despite that law.

Twenty-three states currently allow full medical marijuana, while another dozen permit a non-intoxicating form of the drug for children with severe epilepsy. But each of these programs exists under the constant threat of federal intervention.

Doctors would be free to prescribe cannabis

Rescheduling pot would remove that threat by allowing doctors to prescribe cannabis just as they prescribe other drugs. Currently physicians must issue “recommendations” rather than prescriptions to avoid arrest by the DEA. It could also set the stage for eventual legalization at the federal level.
The Senate bill was initially sponsored by three senators: Cory Booker, Democrat of New York; Rand Paul, Republican of Kentucky; and Kirsten Gillibrand, Democrat of New York. But it soon started picking up additional sponsors, possibly a sign of just how popular weed reform has become.

“This bill that we are introducing seeks to right decades of wrong,” Booker said March 10. “Doctors and patients deserve federal laws that are fair and compassionate, and states should be able to set their own medical marijuana policies without federal interference. I am thankful to Senators Gillibrand and Paul, as well as the Drug Policy Alliance, for their hard work on this common-sense bill to make medical marijuana accessible to the millions of Americans who could benefit from it.”