Move over, April 20. Weed has a new holiday.

Hundreds of Seattle blazers gathered under the Space Needle Dec. 6 to celebrate the first anniversary of legal pot in Washington State. Beneath a perpetual marijuana haze, partiers packed into a bigtop tent for an event sanctioned by the city. 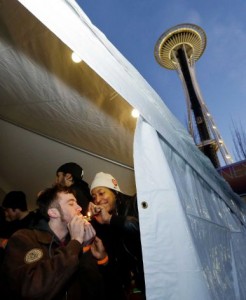 That didn’t sit well with the local federal prosecutor, who questioned whether Seattle officials were sending the right message.

“I think the city is going to have to look carefully whether this is a good use of their resources of their space,” said Jenny A. Durkan, U.S. attorney for the Western District of Washington. “This is an area well trafficked by children, and are you really cordoning it off to kids or are you sending a message to kids?”

For event-goers, though, it was just a chance to unwind and celebrate a hard-won freedom with other consenting adults.

“If we were all in Texas, we’d be arrested and charged with felonies,” said Jay Zozh as the crowd passed around a footlong joint. Zozh moved to Washington a few weeks ago.

The event, with a capacity of nearly 1,000, started at 4:20 p.m. Activist Ben Livingston said he had to fight for three months to get a permit from the city.

“I want to make the point that cannabis consumers are good people, and we should be treated equally with other people when trying to utilize city facilities,” Livingston said.

Dec. 6 was the first anniversary of the day the state’s legal pot policy took effect. That was the day in 2012 when it became legal to possess up to an ounce of weed. Sometime next year, retail stores will begin selling marijuana to the public.

The event was held at the Seattle Center at the same time as three other events: the Winterfest lighting celebration, a performance by the Pacific Northwest Ballet, and a play staged by the Seattle Children’s Theatre. A Pearl Jam concert was held at nearby Key Arena that night.

Livingston invited concertgoers to stop by the tent, but supporters of some of the other events weren’t happy to know the stoners were hanging around. Nine people signed an open letter to the city and the Seattle Center asking the event be cancelled. Signers included a chief of adolescent medicine and a major anti-drug-abuse advocate.

“Seattle Center is a poor location for the party, considering it takes place during Winterfest, a family-friendly event, and among popular venues that cater to children and their families,” the letter said.

The anniversary event was held in a closed tent behind a double-perimeter fence, screened from public view and accessible only by adults. And there was a beer garden at the Winterfest, which, as Livingston noted, didn’t draw a single complaint.