First it was the Bong Bowl: The two NFL teams from the two states that legalized marijuana, facing off in Super Bowl XLVIII Feb. 2. Now two new pot-related contestants have entered the fight.

On Jan. 28, the Marijuana Policy Project, the largest pro-weed group in the United States, announced it would be placing five high-profile billboards around MetLife Stadium in New Jersey, site of the game. The ads will overlook the freeways surrounding the stadium.

Four of the billboards will focus on marijuana’s safety as compared to alcohol. Two refer directly the NFL’s cannabis ban, which often results in especially harsh penalties for players caught using – including the many who smoke to relieve chronic pain resulting from years of play.

“We does the league punish us for making the safer choice?” the billboards ask. A third sign shows a man on the ground with a bottle in his hand, lying next to a football player. “Marijuana: Safer than alcohol . . .” the ad reads, “and football.”

The other billboard offers a sobering statistical reality: Nearly as many people were arrested for marijuana offenses in 2012 as attended all of the last 11 Super Bowls: about 750,000.

“Hopefully it’s going to inspire people to talk to one another about marijuana and particularly its relative harms compared to alcohol and football,” said Mason Tvert, spokesman for the Marijuana Policy Project. “I think a lot of people will be shocked at just how many people are getting in trouble for using a less harmful substance than alcohol. When you’re sitting in a full stadium and you think about the idea of everyone in there being arrested 10 times over, it really gets you thinking about just how many people that is.”

This is hardly the group’s first attention-grabbing stunt in recent months. Last year, the Marijuana Policy Project paid for a billboard ad outside Mile High Stadium in Denver during the NFL season opener. Before that, the organization funded a digital video message outside the Indianapolis Motor Speedway during the Brickyard 400 NASCAR race.

The racetrack gambit attracted few eyes and was cut off mid-day by the owner of the digital screen, but overall the tactics employed by Tvert and his group have had great success, generating national news coverage and putting the group and its issues front and center. 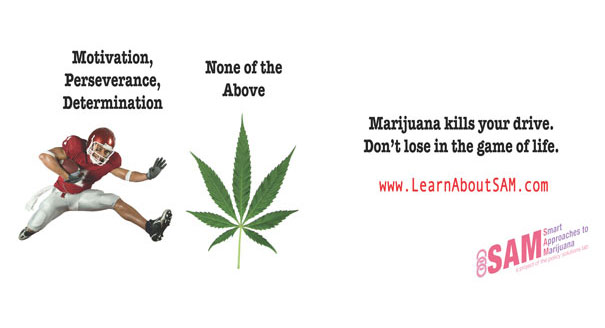 Now, however, there’s some competition. SAM: Smart Approaches to Marijuana, an anti-drug group chaired by former U.S. Rep. Patrick Kennedy, has also bought ad space around the stadium, this time to sell the message that marijuana is bad.

Like Tvert’s group, SAM is using billboards along local freeways, specifically three signs. They all depict the same scene: a football player, a marijuana leaf, and the words, “Motivation, perseverance, determination” above the player. Above the leaf: “None of the above.”

“Marijuana use saps motivation, perseverance and determination – the opposite of what it takes to win the Super Bowl,” Kennedy said in a statement. “It is not a safe drug, especially for kids, and we need to reiterate the message to coaches, parents, players and teens alike that it has no place in football.”