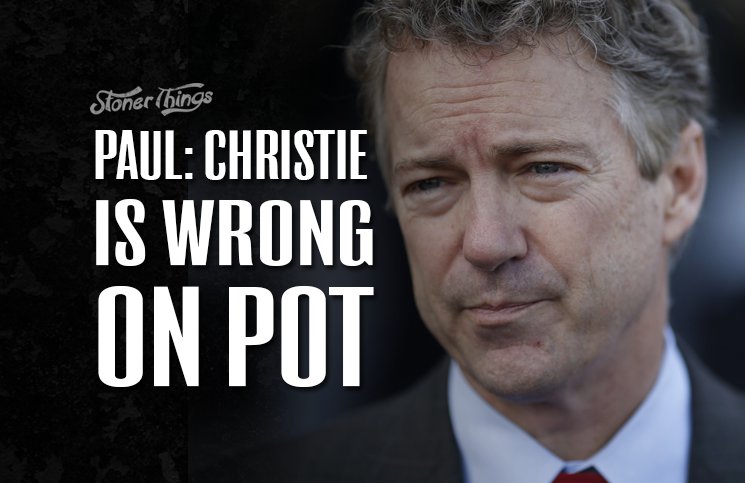 Sen. Rand Paul of Kentucky, a Republican candidate for president, used a recent interview to knock down another candidate’s promises to end legal weed.

New Jersey Gov. Chris Christie, like Paul, is seeking the GOP nomination in next year’s race for the presidency. Neither of the men has much chance of winning, but they have made for an interesting debate over the future of legalization in America.

Christie is a staunch opponent of marijuana reform. He has vowed to sic the DEA on Colorado, California, and other states that have loosened their cannabis laws. “Seize their money, seize their product, close their stores,” he says. The position hasn’t won him much support, but he appears unlikely to back down.

Christie’s message is particularly threatening in California, where the GOP hopefuls met for a primary debate on Sept. 16. Medical marijuana is legal in the state and easy to get, and lawmakers there recently reached a deal to enact new regulations that could strengthen the program. Full legalization could come as soon as next year, and voter support for the idea is strong.

Paul used Christie’s stance against him

In an interview before the Republican debate, Paul took advantage of the unpopularity of Christie’s stance, saying it puts the governor “on the wrong side of history.” Shutting down legalization, Paul said, wouldn’t even work.

“If he wants to put the parents of a kid who had 500 seizures a day away before he started moderating that with cannabinoid oil, he can say so,” Paul told The Washington Post. “He can put someone with MS in jail. He can put someone who’s just carrying a little marijuana in jail. Most Americans are not with him, and it’s not going to sit well with a lot of conservatives and libertarians. I mean, is he going to send federal troops in to (overturn) medical marijuana laws?”

It’s highly unlikely Christie will have his way, even if he wins. The Obama administration has already paved the way for legalization to spread, and the president’s successor, whether Republican or Democrat, is unlikely to muster the massive political will needed to turn back the clock.

Marijuana is now legal for recreational use in Colorado, Washington, Oregon, Alaska, and the District of Columbia. The first retail stores started selling the drug in Colorado in 2014, joined by stores in Washington later that year. Retail weed should be available in Oregon and Alaska by 2016, though it may take longer to open recreational pot shops in Washington, D.C.