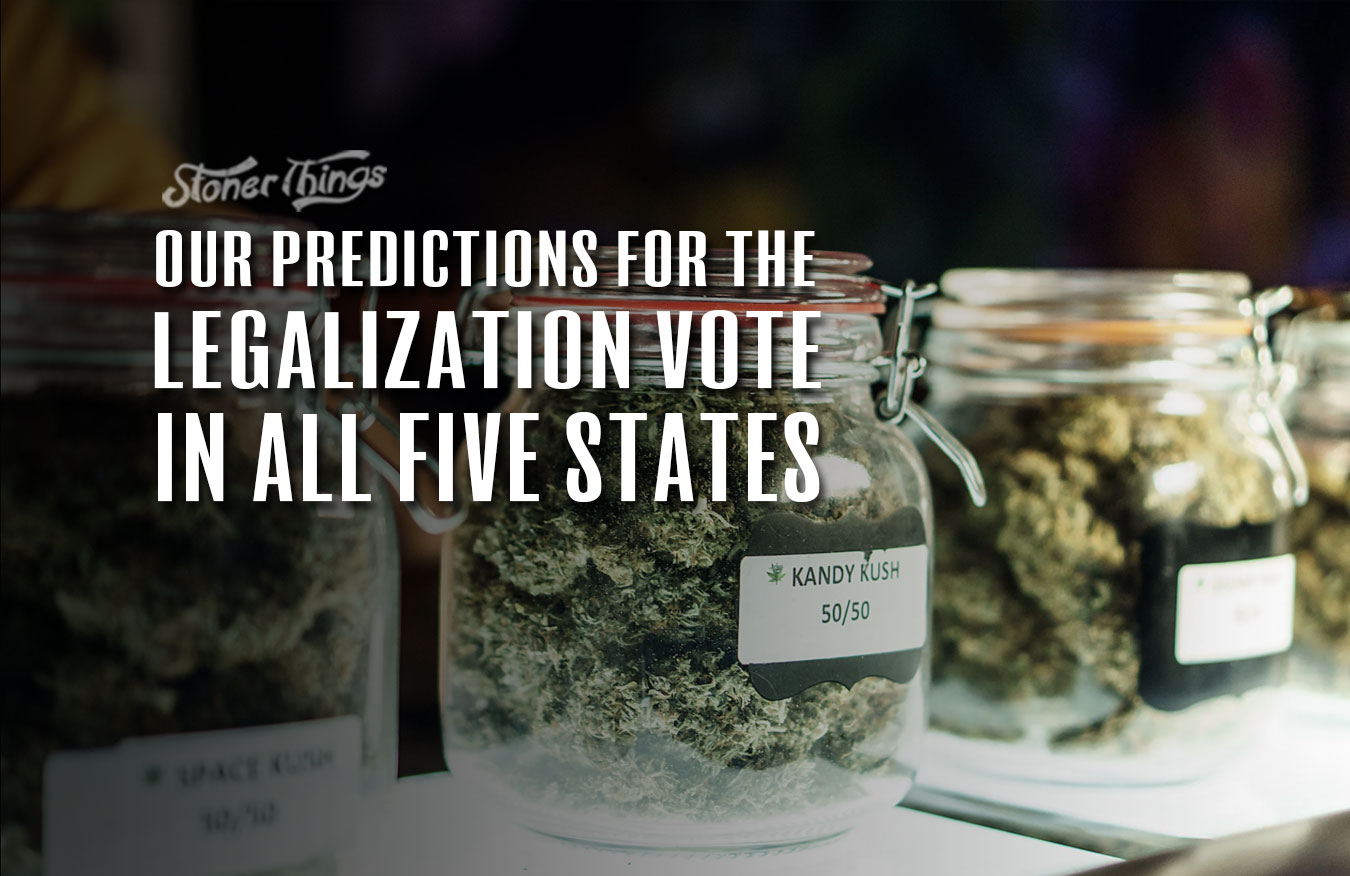 And so the strangest presidential election campaign in living memory enters its final stretch. One candidate battles to save the soul of the nation, the other to protect it from the RADICAL LEFT. Meanwhile, the fight for key seats in the Senate reaches fever pitch as the upper chamber learns how to get things done quickly and contentiously confirms the appointment of Amy Coney Barrett to the Supreme Court. All the while, a pandemic rages in the background.

With the stakes so high, the coronavirus outbreak hasn’t put people off getting out to vote. Far from it. More Americans are voting early and by post than ever before. The US Elections Project predicts voter turnout could be at its highest in over a century.

Many of these voters won’t just determine who will occupy the Oval Office, one-third of the Senate and all 435 seats in the House of Representatives. In five states, they’ll also decide on marijuana legalization proposals.

The 2016 elections were a watershed moment for the US marijuana reform movement. Four states voted to legalize adult-use cannabis sales. A further three said yes to legal medical marijuana. One in five Americans could now legally get high. The ‘green wave’ had arrived, marking marijuana’s move from a fringe political experiment to a legitimate policy choice.

Fewer states have a marijuana legalization ballot question this year than in 2016 – thanks again, coronavirus – but it could prove no less pivotal this year. That’s because while the 2016 marijuana vote was mainly a coastal affair, the states with a question to legalize cannabis on its ballot this year are (with the exception of New Jersey) largely rural and red-leaning.

Here are our predictions.

For the second time in four years, Arizona residents will vote on a recreational weed proposal. Out of the nine states that had a marijuana legalization question on the 2016 ballot, Arizona’s was the only measure to fail. It came close though, with ‘yes’ finishing on around 48 percent of the vote.

Compared to last time the no campaign has been conspicuously quiet, other than a halfhearted legal challenge. And that’s probably because it’s a loser’s bet. All but one poll has reported majority support for legal weed in Arizona in the last few months, while two more recent surveys indicate the yes vote is increasing its share.

These polls consistently find stronger support for marijuana legalization among Democrats than Republicans – somewhere in the region of 70 percent to 40 percent. This may give some cause for concern to Donald Trump given Arizona’s new-found status as a swing state, the special senate election following John McCain’s death and the president’s learned observation that marijuana ballot measures encourage stoner Democrats to get out and vote.

Prediction: A comfortable 55 percent of voters in favor of legal weed. And while we’re at it, the state turns blue as well.

The issue of medical cannabis legalization in Mississippi has devolved into a contest of The People vs The Politicians. Of all the states voting on a legal weed measure this year, Mississippi state officials and lawmakers are, perhaps unsurprisingly, the most hostile to the proposal. Gov. Tate Reeves said he’s “against efforts to make marijuana mainstream,” while former Gov. Phil Bryant took the time to write an op-ed comparing the activist’s initiative to the tobacco industry. A county sheriff described the measure as “dangerous,” while Board of Health member Phil Langton likened the efficacy of medical marijuana to ice-cream.

This year’s ballot measure follows twenty unsuccessful bills to legalize medical cannabis through the legislature. So marijuana reform activists took the reasonable decision to circumvent the politicians, get the measure – Initiative 65 – on this year’s ballot and let The People decide. Unfortunately, Mississippi lawmakers didn’t want The People to have the final word without putting up a fight, so it submitted its own way more restrictive proposal – Initiative 65A – for the ballot as well. So restrictive it essentially boils down to only permitting FDA-approved cannabis-derived medicines.

The group behind Initiative 65 say the lawmaker’s version is designed primarily to confuse voters and sabotage the whole process. The fact the measure is so popular among Mississippi voters would suggest this could very well be the case. According to a recent poll, more than eight in ten Mississippians support legalizing medical cannabis, which is the first question voters will be asked. The second is concerned with how it is legalized. Reassuringly, the same poll finds only 18 percent of respondents preferred the measure advanced by the legislature once furnished with all the details. But will enough voters get to learn the specifics of each proposal?

Prediction: The first initiative to legalize cannabis will pass with a strong majority. The choice between Initiative 65 and 65A will be more competitive, but the activist’s measure will command a slightly greater share of the votes. The People win! But will Mississippi’s state officials respect the outcome and implement it any time soon?

Montana residents will vote on two complementary pot legalization proposals. One, I-190, would legalize adult-use cannabis and set a hefty 20 percent sales tax. The other, CI-118, would amend the state’s constitution to establish the legal minimum age for participation in the weed industry at 21. In what could prove to be a smart approach by New Approach Montana, its proposed measure is the only one out of the five ballot proposals that would only allow state residents to own a cannabis business.

While ‘trendsetter’ is not a word typically associated with Montana, this year’s vote is somewhat of a litmus test for how accepted recreational weed is in America’s Republican-leaning but moderate rural heartlands. And for Montana’s marijuana reform advocates, provisional test results are looking promising. A poll last year found a slim majority of Montana residents favor legal recreational weed. Since then the numbers supporting legalization appear to have increased. A February survey put support for legalizing pot at 54 percent, with 37 percent against the measure. A more recent poll had 49 percent of likely voters in favor of the move and 39 percent opposed. In short, support shows a consistent majority in favor but with a significant number of don’t knows who could tip the balance either way.

Prediction: Adult-use marijuana legalization will pass in Montana but with a paper-thin majority, like 51 or 52 percent.

Of all the weed ballot measures this election, New Jersey’s looks the most straightforward. The Garden State was the first to confirm it would have a marijuana legalization question on its November ballot. Ever since his election campaign, Gov. Phil Murphy has made legalizing adult-use pot a central plank of his tenure. When legalization failed through the legislature, he turned to the ballot. The agreed measure would legalize cultivation, processing and sale of weed for adults 21 and older, while establishing a generously low tax rate.

Polls have consistently shown clear majority support among likely voters for recreational cannabis legalization in New Jersey, often by a ratio of two to one. One of the latest polls is even more dramatic with support for legal weed outnumbering opposition by nearly three to one.

Prediction: Anything other than a resounding win for adult-use cannabis would be a shock. Expect New York and Pennsylvania to then get their act together and move quickly on legalization.

Come November 3, residents of South Dakota will become the first in the country to vote on separate medical and recreational cannabis measures. What’s more, South Dakota is one of the few states in the US that has enacted zero marijuana reforms whatsoever, so it could go from full prohibition to full legalization overnight.

The medical marijuana proposal, Measure 26, would establish an MMJ program for a set list of conditions, while the adult-use initiative, Constitutional Amendment A, would require lawmakers to get a legal weed industry up and running by April 1, 2022.

Polling in South Dakota is not as prevalent as in the other states, but the numbers available look promising for marijuana reform advocates. 70 percent of respondents support medical cannabis while 60 percent are in favor of recreational weed, according to a poll conducted last year that was funded by a group opposed to legalizing adult-use marijuana in the state. Awkward. The latest poll still gives the medical cannabis measure a commanding lead but the recreational proposal is only ahead 51 percent to 44 percent with the remaining respondents unsure.

Prediction: South Dakota voters will overwhelmingly approve the medical cannabis measure but the recreational amendment is a much tighter race. It’s hard to imagine any state doing a 180 on marijuana prohibition so quickly but then again it would be a pretty 2020 move. What the heck, South Dakota to pass adult-use cannabis in a 51-49 percent vote. The marijuana shock of the night.