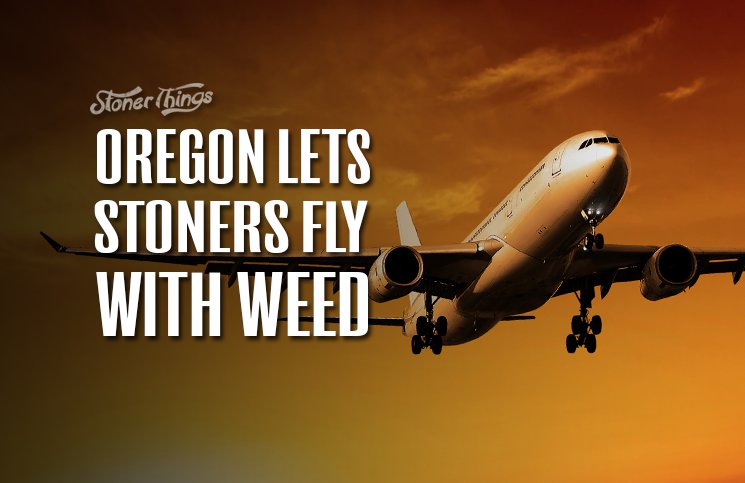 Sometimes, you can take it with you. 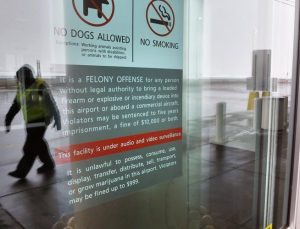 The largest airport in Oregon has announced that passengers can fly while carrying small amounts of legal weed – as long as they’re not leaving the state.

The decision means passengers flying out of Portland International Airport may board their flights with up to an ounce of weed. Even if they’re stopped at security, they can keep their marijuana.

The move only applies to in-state flights – from Portland to Eugene, for example. Though cannabis is now legal in Oregon, it remains banned by federal law, and carrying it across state lines, even for legal use, is a felony.

“For those flying to other cities in the State of Oregon, traveling with marijuana is allowable as long as that passenger meets all the other legal requirements of the state law,” said Steve Johnson, spokesman for Port of Portland, which owns and runs the airport.

Oregonians voted in 2014 to legalize weed. It is now legal to possess up to 8 ounces at home and up to 1 ounce in public. Airports, which are typically run by local governments, are considered public spaces.

Even with the new law, however, airports are under no obligation to let passengers carry pot. It wasn’t immediately clear whether other airports in Oregon would follow suit.

Marijuana is also legal in Colorado, Washington, Alaska, and the District of Columbia. Each place has its own local rules about cannabis and air travel.

In Colorado, for example, no public airport allows weed. Some passengers may be able to carry marijuana through private airports aboard corporate flights, but only if they don’t leave Colorado air space.

Portland’s new policy took effect in late July. Portland International Airport is a heavily trafficked airport, one of the busiest on the West Coast, and the policy could potentially affect thousands of travelers.

There is currently no legal way to transport marijuana from one state to another, even if the drug is allowed in both. That means even people who frequently travel between Oregon and neighboring Washington State must leave their pot behind.

Passengers carrying marijuana through security at the Portland airport will be stopped if TSA agents spot the drug, airport officials said. They will prevent those passengers from boarding with more than 1 ounce and will check their boarding passes to make sure they don’t leave the state.

While it’s illegal to carry weed through any airport in Colorado, Seattle-Tacoma International Airport in Washington allows passengers to travel with the drug. Alaska, on the other hand, has yet to decide what its policy will be.

“It would be premature for the airport to put forth any policies or procedures until we know what rules we’re supposed to be talking about,” said John Parrot, manager of Ted Stevens Anchorage International Airport in Alaska.

In Oregon, travelers will have to throw away any marijuana before flying out of state. They must also dispose of anything beyond the 1 ounce limit. Breaking these rules could lead to both state and federal criminal charges.

The decision to permit marijuana at the Portland airport doesn’t necessarily suggest other airports and other states will do the same. Colorado, for one, is likely stuck with its airport bans, at least for now.

“We don’t have any plans to reevaluate our marijuana policy,” said Laura Cole, spokeswoman for Denver International Airport.