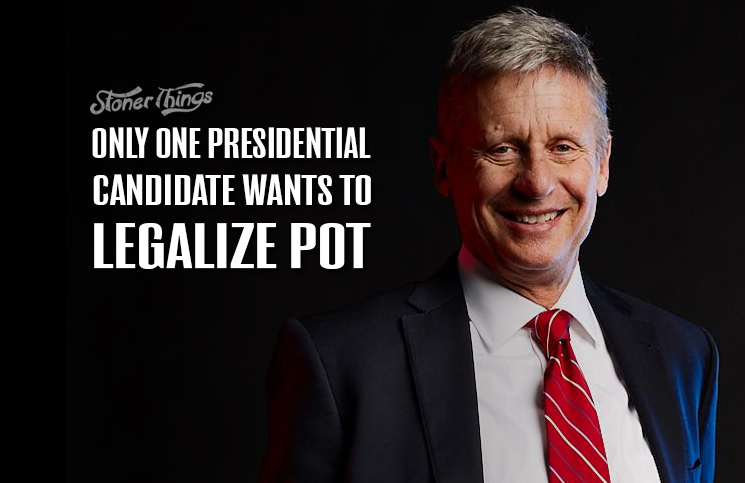 The presidential primaries are over and done, and barring a major summer surprise (Donald Trump throwing a temper tantrum and dropping out, for example), we know whose names will be on the ballot Nov. 8. But there’s one man whose name you may not instantly recognize – and he’s the only candidate who has stuck his neck out to push for legal marijuana.

Gary Johnson secured the Libertarian Party’s nomination for president in May, during a raucous party convention in Las Vegas. It was a noisy affair, with contested ballots and bizarro delegates, a decidedly different scene from the polished Republican and Democratic national conventions set for July and August.

Johnson, like his party, favors small government in everything, including drug policy. His is the only “mainstream” party with legalization in its official platform. The government has no place in deciding what adults should put in their bodies, libertarians believe, just as they feel it has no place collecting taxes or spending on domestic programs.

Sen. Bernie Sanders, who lost the Democratic primaries to former Secretary of State Hillary Clinton, sponsored legislation last year that would reclassify cannabis so it would be easier to legalize. But with Hillary now at the head of the Democratic ticket, reformers may have to push harder to get that party fully behind legalization.

As for Donald Trump and the Republicans, who knows where they stand? Most local, state, and congressional candidates openly oppose large-scale marijuana reform, but Trump has veered back and forth on the subject, saying at times that pot should be legal and at others that it shouldn’t. He once advocated the legalization of all illicit drugs, then backed away from that position.

Johnson’s is the only party that doesn’t need to be prodded into supporting legal marijuana. But of the three that have garnered any real media attention this year, his is also the least likely to win in November. Johnson also led the Libertarian ticket in 2012, and while he’s doing better in polls this time around, it’s not by much.

The Libertarian Party won 1 percent of the popular vote in the 2012 presidential election, its best showing to date, but nowhere near the 15 percent poll numbers needed to appear on a mainstream presidential debate – the holy grail of most long-shot third parties. This year, Johnson is polling at about 10 percent, suggesting he could take the stage and even win a decent share of the vote in November. But early general election polls are notoriously unreliable, especially when it comes to third-party candidates.

Of course, there is roughly zero chance Johnson and his running mate, former Massachusetts Gov. William Weld, will make it to the White House in 2017. But if their campaign can bring a spotlight to badly needed drug policy reform, it could drag the other two parties toward legalization, even if they only come kicking and screaming.