Whether you love him or hate him, Oliver Stone is part of American cinematic history and an outspoken voice on the unfair prohibition of illegal drugs. His film-making career has been garnered with accolades, awards and controversy alike. From his academy award winning films, Platoon and Born on the 4th of July, which recalls his own personal experiences in the jungles of Vietnam and the country’s skewed view of him and his comrades upon returning, to The Doors, a film that chronicles Jim Morrison’s rise to stardom.

In 2012, while doing public appearances for his Mexican-drug war epic, Savages, he stated that during his two tours of duty in Vietnam marijuana saved his life, stating, “it kept me from becoming a beast… it fed my humanity… kept me conscious of the value of life.” He continued by stating that the young men that served honorably in the war, who used marijuana, never did so on the front lines. But did so in an attempt to calm down and gain perspective on the hell in which they fought for their lives.

Stone, known for his leftist political views, went on further to criticize America’s war on drugs. OI an appearance of Late Nite with Jimmy Fallon, he stated, “There is this crazy war on drugs in this country that is really a farce… it hasn’t worked. It’s really a war for money.” 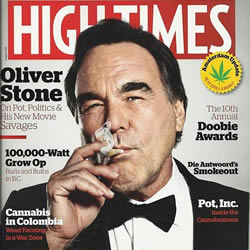 Of course, any celebrity with this viewpoint is rarely without a possession charge or two under their belt. While he was filming his 1994 ultra-violent satire on the media, Natural Born Killers, he was arrested for possession of psilocybin or “magic” mushrooms while trying to scout locations for a pivotal moment in the movie. There have been other arrests for possession on undisclosed narcotics during his career.

And at age 66, Stone shows no signs of changing his viewpoints on the issue of drugs, particularly marijuana. He often compares the marijuana of California to the wines of California, saying there is no significant difference in the two. Whether you love him or hate him, he is relevant in the time in which he creates his art.