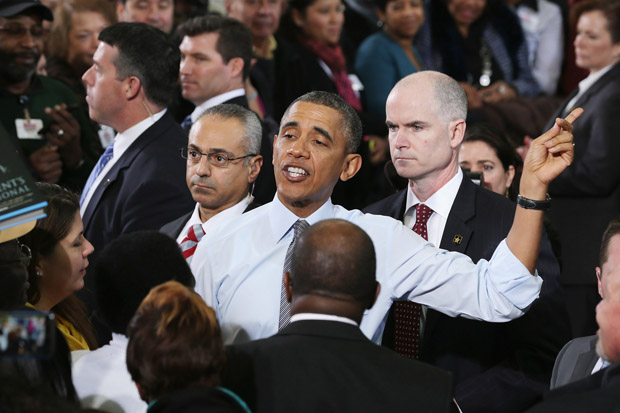 President Obama, who said in January he believes marijuana is less dangerous than alcohol, went further in an interview with CNN Jan. 31, implying – though not outright saying – he might favor removing cannabis from the most restrictive category of controlled substances.

In his interview with The New Yorker last month, Obama said it was “important” to let Colorado and Washington continue with their experiments in legal weed. Overly punitive approaches to pot land the wrong people in jail and punish some more than others, he said.

Asked by CNN whether that means he’d support a reclassification of marijuana under federal law, the president demurred.

“First of all, what is and isn’t a Schedule 1 narcotic is a job for Congress,” Obama said. “I stand by my belief, based, I think, on the scientific evidence, that marijuana, for casual users, individual users, is subject to abuse, just like alcohol is and should be treated as a public health problem and challenge. But as I said in the interview, my concern is when you end up having very heavy criminal penalties for individual users that have been applied unevenly, and in some cases, with a racial disparity.”

By passing the buck to Congress, Obama tried to absolve himself of responsibility for reforming federal law now that a majority of Americans want to legalize cannabis. With weed legal in Colorado and Washington, more states are expected to follow suit in the next few years.

But the issue isn’t entirely out of his hands. If he chooses, the president could reschedule marijuana by executive order.

Controlled substances are divided into several categories by federal law. Schedule 1, the top category, is reserved for drugs the government believes are extremely addictive, extremely dangerous and medically useless. It includes heroin, ecstasy and marijuana, among other substances.

Other schedules cover less dangerous drugs. Schedule 2, for example, includes some substances such as cocaine and methamphetamine that, while extremely dangerous and addictive, have some limited medical applications.

Marijuana proponents have long sought to reclassify the drug, whether by moving it to Schedule 2, Schedule 3 (which includes substances such as ketamine and anabolic steroids) or Schedule 4 (Valium, barbiturates and other commonly used drugs).

Congress could do so by legislation, but the Justice Department could also do it by way of the DEA, which has the power to reschedule controlled substances. Activists have been pleading with the agency to do this for years, to no avail.

The odds of that happening soon aren’t good, though Obama’s words provide some hope. For now, he said, he would wait and see.

“We’re going to see what happens in the experiments in Colorado and Washington,” Obama said. “The Department of Justice under Eric Holder has said that we are going to continue to enforce federal laws.”

But he said the government won’t target individual users. Federal law enforcement doesn’t have the manpower, he said, to catch everyone “smoking a joint on the corner.”