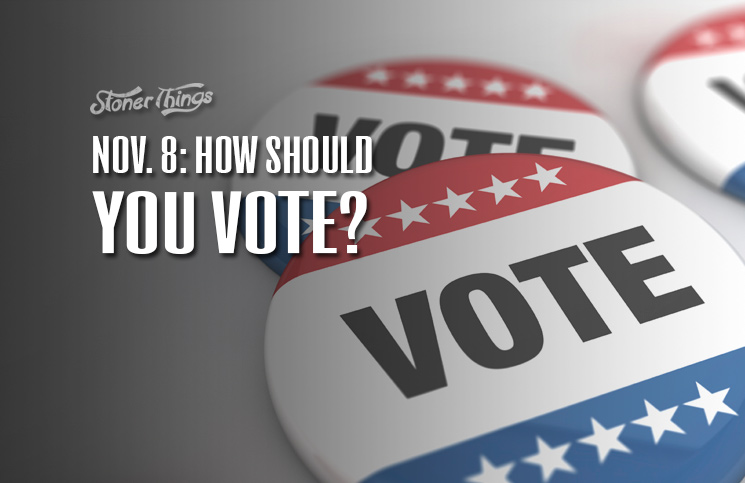 There’s no avoiding it: Election Day is almost here, and roughly 99 percent of the American public couldn’t be happier to see it pass. It has been that ugly.

But ugly is not the same as unimportant. The stoner vote is critical, not only in legalizing marijuana in more states, but also in choosing a president whose decisions will impact drug policy for generations.

So how best to use your vote? Here are our endorsements for Election 2016.

California is about to legalize marijuana, give birth to the world’s largest pot market, and forever change drug law in America. With public support around 60 percent, Proposition 64 is expected to pass, but every vote matters.

Prop. 64, also known as the Adult Use of Marijuana Act, would allow adults over 21 to buy, use, and possess up to 1 ounce of pot, and to grow up to six plants at home. It would also impose a special sales tax and stringent industry regulations. 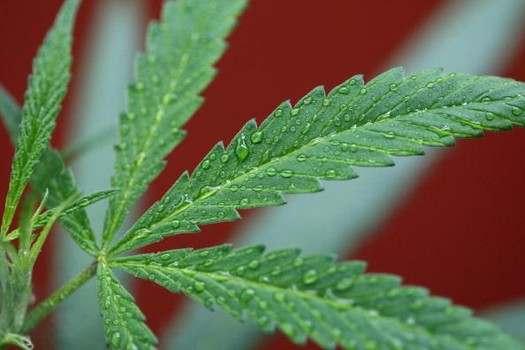 Among the many important issues on the 2016 ballot, this is easily one of the biggest for tokers. It’s also an easy call. We recommend a yes vote on 64.

Nevada voters face essentially the same decision as their California neighbors. Question 2 would legalize sale, possession, cultivation, and consumption of small amounts of cannabis in private. The proposal requires a majority vote to pass, and polls show it winning roughly 50 percent, so it could still go either way.

That means every vote could make the difference between legal weed and continued prohibition. If you live in Nevada, please get out and vote yes on Question 2.

Arizona’s Proposition 205 would legalize the purchase, possession, and use of up to 1 ounce of weed, plus home cultivation of up to six marijuana plants. With public support strong, if not yet strong enough to breathe easy, advocates are hopeful.

Arizona, like Nevada, requires a vote of at least 50 percent to pass a constitutional amendment. The most recent polls show slightly more than half plan to vote yes, putting Prop. 205 on the edge of victory. But your vote could help tilt it over the top, so we recommend a yes vote.

You may notice a pattern here. Five states will vote on legalization, and the proposals are all very similar. But the rules would be a bit less strict under Question 1 in Maine. Adults would be allowed to use up to 2.5 ounces of pot and grow up to six flowering plants at home.

Polls show support for Question 2 is strong at about 53 percent. But even that is close enough that every vote matters. We support this initiative and hope you will too.

Question 4 is another easy call. This Massachusetts initiative would legalize possession of up to 10 ounces of cannabis in private and up to 1 ounce in public. Like the other proposals, it would also impose new regulations and a sales tax.

Many of the state’s political leaders have pushed back against Question 4, but public support stood at 55 percent as of early October. Still, it would be foolish to assume victory is guaranteed – especially if you don’t make the effort to vote.

It should be clear by now that there are only three viable choices for stoners in the general election. Libertarian Gary Johnson promises the purest vision of drug reform; Green Party candidate Jill Stein strongly favors legalization nationwide; and Democrat Hillary Clinton says she would reschedule marijuana under federal law while supporting further legalization in the states.

Republican nominee Donald Trump, meanwhile, is imploding on the campaign trail and is no longer a serious candidate for the White House. This is not a bad thing for tokers: Trump never represented realistic hope of reform. He is too erratic, too inconsistent, too unreliable to be trusted.

Clinton isn’t perfect for reformers who see change coming too slowly. But she’s the strongest choice available, by far. A vote for Stein or Johnson is wasted. A vote for Clinton is the best step toward ending pot prohibition forever.

Tell us: How will you vote in November? Leave a comment below.