A new breed of marijuana stores is on the way in Colorado, and this time it will be open season.

State officials said they had issued licenses to 46 stores by the end of September, along with 37 grow facilities and 13 companies that make edibles. Many of these, though not all, are newcomers to the legal cannabis game in Colorado. Oct. 1 marked the first day that newcomers were allowed to open their shops.

When the first pot shops opened statewide Jan. 1, only already-existing medical marijuana businesses were allowed to participate. This time around, the market will be open to all comers – all comers who can meet the financial and legal requirements, anyway.

Each of the cannabis businesses still must win local approval before they can open. Like other states, Colorado lets its local communities ban pot shops if they choose.

The state already has about 240 recreational pot shops. Denver has the most, and officials there have blocked newcomers from entering the market until 2016.

The licensing process was closed to outsiders in the first round because the state wanted to ensure an effective, safe legal marijuana program run by experts. Now that the necessary regulations are in place, and competition is already under way, state officials were ready to open the market.

Mike Elliott, executive director of the Marijuana Industry Group, said the realities on the ground have made it very difficult to open stores, so it’s not clear how many new shops will appear this time. Real estate shortages, tough zoning codes, and the state-mandated financial backing all stand in the way, he said. 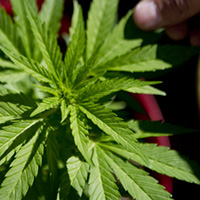 “It’s tough to know how many people are really going to apply,” Elliott said. “Running a marijuana business is much, much more difficult than it might initially appear.”

Natriece Bryant, a spokeswoman for the Colorado Marijuana Enforcement Division, said the revenue agency wouldn’t initially disclose where the retail shops are located.

Another big change hit the Colorado weed market in October: Recreational marijuana stores no longer have to grow most of their own product. Such businesses can now separate, allowing professional growers to cultivate plants and professional retailers to sell the drug.

The state won’t track how many pot businesses break up or how many stay together, Bryant said.