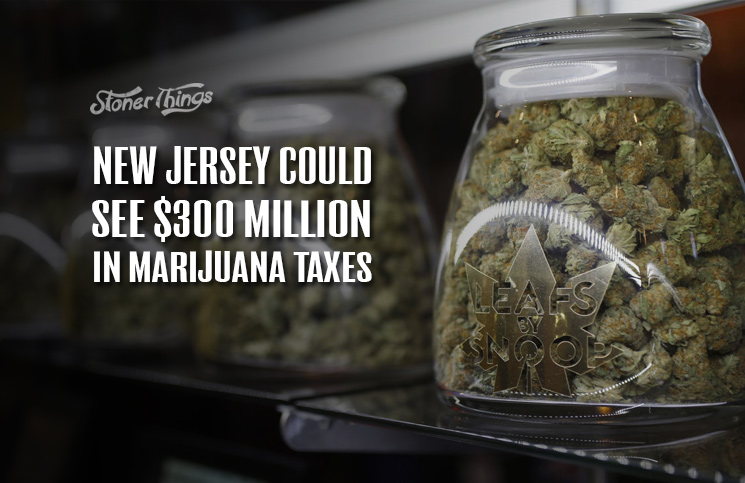 The State of New Jersey could rake in roughly $300 million in annual tax revenue should voters decide to legalize marijuana for recreational use, according to a study released by reform advocates.

The report, published in May by New Jersey United for Marijuana Reform and New Jersey Policy Perspective, explains that more than 360,000 adults in the state illegally use cannabis each month. Collectively, they consume more than 2.5 million ounces each year.

That means a black market worth nearly $870 million statewide, according to the study. A legal industry, on the other hand, would generate $1.2 billion in sales from customers living up and down the Atlantic Seaboard. A 25 percent sales tax on marijuana would generate about $300 million a year.

Taking control from the black market

“New Jersey can’t afford to wait — it’s time to legalize, tax, and regulate marijuana,” said Ari Rosmarin, the public policy director for the American Civil Liberties Union of New Jersey, itself a member organization of New Jersey United for Marijuana Reform. “With just one vote, the legislature can raise hundreds of millions of dollars annually, help end a civil rights injustice, and make sure that no more New Jerseyans see their lives ruined for something every president in the last 24 years has done. It’s time for common sense, and that means ending prohibition again.”

Efforts to legalize cannabis in New Jersey are already underway. State Sen. Nicholas Scutari, a Democrat, introduced legislation in May that would allow for home cultivation, sale, and possession of small amounts of marijuana by adults over 21. It would also impose regulations and sales taxes on a new legal pot industry.

Gov. Chris Christie, however, has insisted he would never sign the bill, even if it makes it through the legislature. Christie, despite his wide unpopularity, staunchly opposes cannabis reform of any kind.

“I am not going to be the governor who is going to tell our children and our young adults that marijuana use is okay. Because it’s not. I don’t care about the tax money that may come from it.”

Medical marijuana took effect in New Jersey just months before Christie assumed office in 2010. The previous governor ushered the legislation past lawmakers during a lame duck session, knowing Christie would have vetoed it.

The good news is, Christie himself is now on his way out of office. He has 18 months left, and Bill Caruso, a steering committee member of New Jersey United for Marijuana Reform, called the governor “just one voice” in the legalization debate. Caruso said he has yet to hear from political leaders with the same level of hostility toward the idea.

“The opposition has been eerily quiet on this,” he said. “The time for us in the advocacy community and in the legislature is to do more than just talk.”

Legal cannabis is already on its way to the East Coast. If Massachusetts doesn’t legalize in November, Maine or Rhode Island might. Even New York could act by the end of the year, although Vermont has passed up the opportunity until 2017. Four other states, all in the American West, allow pot for recreation, as does the District of Columbia.

Tell us what you think: Will New Jersey take advantage of the tax windfall that would come with legalization? If not now, when? Leave a comment.