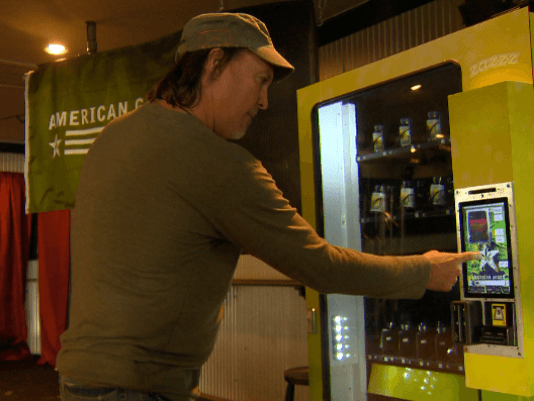 It’s the dream only a lazy stoner could love. And it’s finally come true.

A group of marijuana entrepreneurs unveiled Colorado’s first pot vending machine in April, opening the door to a future of semi-convenience, security, and lazy stoner jokes. They’re not using it yet, and it’s not quite as simple as you might think, but it’s still something to see.

They call it the “ZaZZZ.” It was designed and built by Stephen Shearin’s company, American Green. It serves up marijuana edibles, and it’s designed for medical cannabis patients. 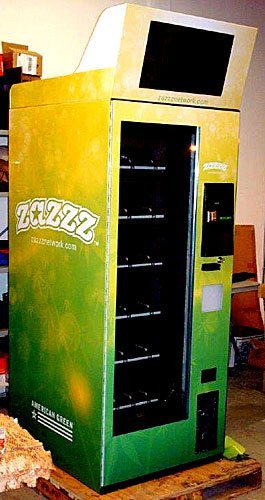 The first machine was displayed at Montana’s Smokehouse barbecue restaurant in Avon April 11. It will be placed at the Herbal Elements dispensary in nearby Vail and filled with products from the shop.

“We’re looking forward to using the ZaZZZ machine to easily track all this inventory,” said Herbal Elements owner Greg Honan. “We’re going to eliminate the middle man. It’ll go straight from the budtender right into our machine. There’s no room for theft by patients, employees . . . there’s no way to lose track of the inventory.”

The point of the machine isn’t exactly convenience. You still have to present your ID and medical marijuana card to get access to the treats inside. Biometrics is used to verify age. And they won’t be vending recreational weed.

Plans are underway to place several machines in MMJ dispensaries across Colorado. They will serve more like automated checkout lanes than traditional vending machines.

The inventors and builders of the ZaZZZ have high hopes, though. It could make the industry safer, improve recordkeeping, and reduce costs. All good news for customers.

“I don’t think we’ve dreamed what it can do yet, and that’s the whole point,” Shearin said. “You start with this and you start making your way into the future. I think this is a great starting point, and we’re excited about it.”

Naturally, not everyone is thrilled by the idea of a marijuana vending machine. Opponents of Amendment 64, the initiative that legalized pot in Colorado in 2012, warned that such machines would become an everyday sight if weed became legal.

Still, the unveiling of the ZaZZZ drew little heat. Perhaps that’s because these vending machines won’t be appearing on city sidewalks anytime soon. Or perhaps it’s because Coloradans and Americans are growing accustomed enough to legal pot that a story like this isn’t such a big deal anymore.