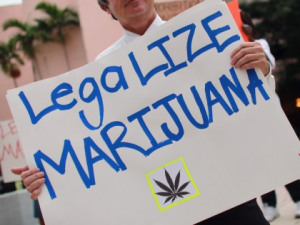 The Fight To Get MMJ On The Ballot

Ben Pollara, director and treasurer of People United for Medical Marijuana, said his group had gathered about 140,000 signatures as of Aug. 16, enough to trigger state Supreme Court review of their proposed constitutional amendment. Just 68,314 signatures were needed.

It’s only the first step in a long petition campaign. PUFMM, as the group is known, must round up at least 683,149 signatures by Feb. 1 in order to get the question on the ballot.

If Florida voters approve medicinal cannabis, the Sunshine State will become the 21st in the nation to legalize it…

Pollara said his group would temporarily stop its petition drive until the Supreme Court rules on the constitutionality of the proposed initiative. He said it was a matter of finances, and PUFMM will ask the court to expedite its review so the group can get back to work.
“You got $150,000 a week to pay to collect signatures?” Pollara asked.

According to the Herald, PUFMM had collected 110,000 signatures by Aug. 15 and was expecting to gather another 30,000 by the end of the week. In order to win in 2014, medical pot proponents will have to win 60 percent of the vote. That shouldn’t be too difficult, though, since polls show them leading by 70 percent.

PUFMM is also known as United for Care, a group headed by chairman John Morgan. Morgan, an Orlando attorney and major political fundraiser, has attracted headlines for his high-profile political connections.

Morgan’s personal injury firm employs former Gov. Charlie Crist, who is rumored to plan another run for the office. Some have accused Morgan of using the medical cannabis drive as a political platform for his colleague, a charge Morgan denies.

In a speech in early August, he said he and other medicinal pot proponents were pushing in Florida because they’ve seen first-hand what it can do. Morgan’s father, who suffered from chronic nausea, was brought back to life by marijuana despite being “the most anti-drug guy in the world,” Morgan said.

“He got to sit at the table and have a meal and a conversation.”

If Florida voters approve medicinal cannabis, the Sunshine State will become the 21st in the nation to legalize it (unless another state gets there first). New Hampshire and Illinois became the 19th and 20th states, respectively, when they enacted medical pot laws earlier this year.