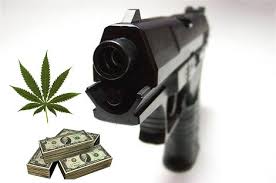 A federal judge handed down a 12-year prison sentence to a man who was shot while robbing a Washington marijuana dealer.

U.S. Attorney Jenny A. Durkan announced that Ferdinand Clay, 32, of Seattle was sentenced June 9 to 12 years in federal prison, followed by three years of supervised release.

Clay’s partner in the robbery, Melvin Charles Slaughter, 31, was sentenced in April to 14 years in federal prison.

According to authorities, the two men robbed Jason Loken Aug. 13, 2013. Loken, who lives in Maple Valley, grew marijuana at the time. He described himself as a medical cultivator, though it was unclear from published reports whether he had any actual ties to a medical cannabis business or made money as a street dealer.

Clay and Slaughter attacked Loken, tied him up, and stole guns and weed from him. But he managed to break free and grabbed a gun he had hidden under his mattress. He chased the robbers out of the house, firing several shots as he ran.

Loken hit Clay in the neck, face, and hip. Slaughter was also injured. The two robbers jumped into their car and sped away, throwing blood-covered items onto the road as they went, including a few of the guns.

Each man went to a different hospital and recovered from his wounds. Later, Clay and a third member of the robbery team, a prostitute who was sleeping with Loken, turned themselves in to police. Officers recovered the bloody items from the roadway.

In addition to the robbers, Loken was sentenced last month to almost three years in prison for his role in the incident.

“Drug dealing is a volatile business, where guns and violence threaten public safety,” Durkan said. “The two robbers who have extensive criminal history will serve the longest sentences. But the drug dealer who attracted this violence to his quiet neighborhood will also spend years in prison.”

Marijuana entrepreneurs are facing increased threat from robbery in Washington and many other parts of the country.

That’s because federal law blocks banks and other financial institutions from doing business with them.

Instead, pot shops and other companies are forced to deal exclusively in cash. Carrying and keeping large amounts of currency, whether to pay vendors or tax bills, is an invitation to attack. Even entirely legitimate providers, whether in medical or recreational weed, are at risk.

The federal government has taken steps to relieve that problem, but almost everyone agrees they’re too little. Assuming Loken was a street dealer, he was putting himself at risk. But MMJ and legal pot need protection from thugs, and until they get it, there will be a lot of similar incidents.