They waited in line for hours in Denver, documents in hand. But they weren’t there to buy weed. They were there to work for it.

The CannaSearch marijuana job fair March 13 drew thousands of people, who stood in a line that stretched several blocks. They brought their resumes in search of jobs in a booming industry that is attracting workers from around the country.

Shannon Irvin drove the 900 miles from his home in St. Louis to apply for work. He’s unemployed and said he hopes to break into the industry. He waited in line for two hours.

“With this type of industry and the way the money’s coming in, this is the place to be right now,” Irvin said.

Both Colorado and Washington State legalized marijuana in the 2012 elections. The first recreational pot shops opened in Colorado on Jan. 1, while stores will open in Washington in the late spring or summer.

Shops in Colorado did booming business in the first few weeks: Buyers spent $14 million on weed products in January, according to the state. That revenue generated about $2 million in tax payments. Though that puts the state behind pace on its estimates for the first six months of 2014, few stores were open in January, and revenue will pick up as more join the market.

Luis Ramirez, co-owner of the Walking Raven Wellness Center in Denver, had a booth at the job fair. He came because exploding sales forced the business to expand, he said.

“Our sales increased about 300 percent,” Ramirez said. “Our traffic through the stores increased by the same number. So that’s why we’re here today. We actually need to hire more folks to help with that traffic and that added revenue.”

The line outside the headquarters of O.PenVape, the vaporizer manufacturer that sponsored the event, started forming at 6 a.m., and the first job seeker waited five hours. More than a dozen companies participated, including Walking Raven, CannaClassifieds.com, Dixie Elixirs, and Colorado Green Tours. 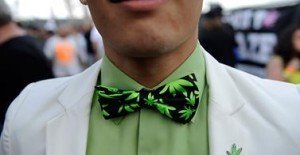 Todd Mitchem, who organized the job fair, said there would be more to come.

The event drew job hunters from as far away as California and Alabama, he said, and attracted all comers, from hard-core stoners to button-down nine-to-fivers. One thing that wasn’t appreciated, though: smoking dope.

“Inside the cannabis industry, we are focused on professional qualified people, just like any other industry,” Mitchem said. “We won’t be impressed if someone says, ‘I’ve been smoking all morning, and I can still talk.’”