Minnesota Gov. Mark Dayton told a mother whose child needs medical marijuana she should turn to the black market or smuggle it from a state with legal MMJ.

Dayton has repeatedly rejected attempts to pursue medical cannabis in the state, despite majority support and a willing legislature. For months he said he wouldn’t sign any legislation that didn’t have the broad backing of law enforcement groups – a simple impossibility.

Lately, he changed his tune, slightly, and said he would ask for $2.2 million to fund a study into CBD oil, a very limited form of medical marijuana used almost exclusively to treat children with severe epilepsy. The oil, which contains little or no THC, doesn’t get users high.

Several of the most conservative states in the country are taking the same approach, primarily because it removes the stigma of marijuana as a “bad” drug for “naughty” people who use it to have fun. Of course, it also renders the drug useless to most MMJ patients.

But Dayton’s plan didn’t last long. The people whose support he needed most, parents, saw the scheme for what it was: another attempt to pass the buck.

When the issue first arose a couple years ago, Dayton said it was up to cops to decide whether Minnesota should have medical pot. Now he wants scientists to make the decision. The only leader in the state unwilling to take a side seems to be Mark Dayton.

On March 25, Dayton said the chances for that project were “slim and none” because the parents of epileptic children didn’t support it.

The parents who had tried to work with the governor lashed out at him in a news conference the next day.

“My daughter doesn’t have time to wait and she shouldn’t have to suffer,” said Maria Botker, who moved to Colorado with her 7-year-old daughter Greta so Greta could get the medicine she needs.

Since the move and the application of MMJ, Botker said, the girl’s seizures have dropped by more than 80 percent. 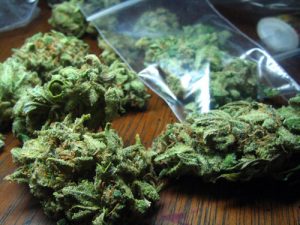 Dayton apparently advised one mother to buy weed on the street for her son. Marijuana possession is a non-criminal offense in Minnesota, as is possession of paraphernalia. A $200 fine applies. But the offense still appears on one’s criminal record and can make it impossible to find employment or residence.

Smuggling MMJ from another state is a federal felony with stiff prison sentences.

“[Dayton] told me, ‘You can buy it on the street. It’s decriminalized in Minnesota. There’s a good distribution system here already,’” said Jessica Hauser. “I told the governor that was unacceptable. I shouldn’t have to become a criminal to help my son. I could lose both my children.”

At least one other MMJ supporter overheard Dayton’s comments to Hauser and confirmed them to the Associated Press.