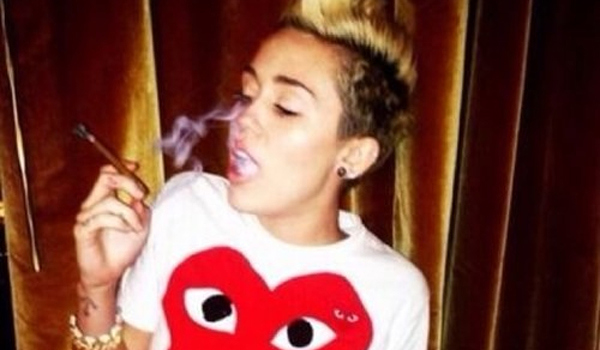 Willie Nelson, move over. Pot, it turns out, has a new, very vocal and very prominent advocate: Miley Cyrus, the once-innocent starlet who has rather suddenly donned the armor of the sexually audacious.

Cyrus, just 20, has talked about her love of weed before. She once quipped that “you know you’re a stoner when your friends make you a Bob Marley cake.”

But a new interview with Rolling Stone blows the lid off her (rather extensive) drug use and her her love of ganja – which she calls “the best drug on Earth.” The comments appear in the Oct. 10 issue of the magazine. Select quotes were released in advance.

“I think weed is the best drug on Earth.” –Miley Cyrus

“I think weed is the best drug on Earth,” she told Rolling Stone’s Josh Eells. “One time I smoked a joint with peyote in it , and I saw a wolf howling at the moon.”

Though Cyrus didn’t list all the drugs she’s tried, it’s clear she’s been through a few, including molly (a purified form of ecstacy) and cocaine. But nothing compares to weed, she said.

“Hollywood is a coke town, but weed is so much better,” she said. “And molly, too. Those are happy drugs – social drugs. They make you want to be with friends. You’re out in the open. You’re not in the bathroom. I really don’t like coke. It’s so gross and so dark. It’s like, what are you, from the Nineties? Ew.”
The interview makes clear that Cyrus is no lightweight when it comes to social issues, either. Asked about the outrage over her recent sexually charged performance at the Video Music Awards, she pointed out that more time was spent agonizing over that than the Trayvon Martin verdict. 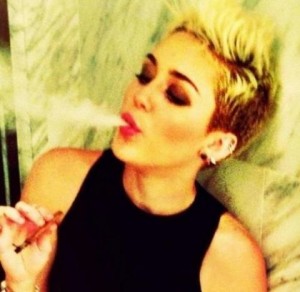 Cyrus is hardly alone in promoting pot within the entertainment world. Musicians from Snoop Dogg and Willie Nelson to Melissa Etheridge and Alanis Morissette support legalization, along with actors including Danny DeVito, Morgan Freeman and Susan Sarandon. Even Stephen King, who swore off drugs and alcohol decades ago, fervently supports regulated legalization in Maine.

And there are even more celebrities – from George Clooney and Brad Pitt to Ted Turner and Jennifer Aniston – who are known tokers but don’t openly involve themselves in marijuana politics.

Cyrus, though, is particularly vocal, especially for such a young age – and for someone who just ended a long run as a supposedly chaste child star. She isn’t yet even of age to buy weed in the two states where it’s legal.