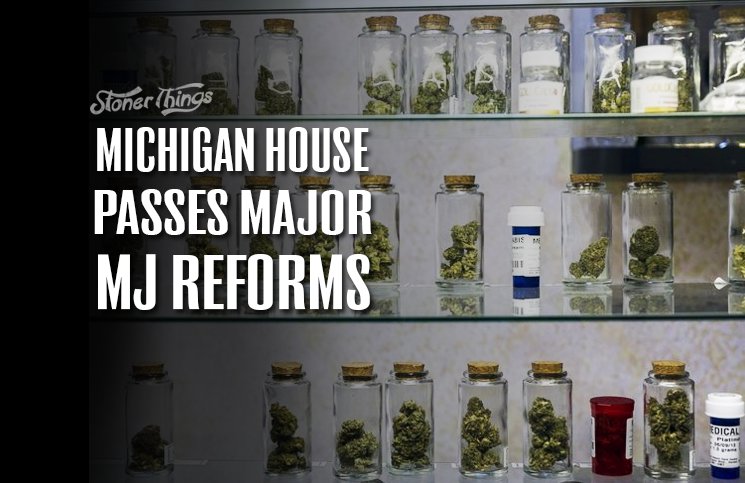 Medical marijuana patients in Michigan could soon find themselves buying their medicine at commercial pot dispensaries, thanks to reforms passed by the state’s House of Representatives in October.

The new cannabis laws, if they pass the state Senate, would add a new 9 percent tax on MMJ, composed of a 3 percent excise tax and a 6 percent sales tax. Dispensaries would be allowed for the first time, though they could sell only non-smokeable forms of the drug.

That wouldn’t leave patients with no access to smokeable pot. They could still grow weed under the state’s medical marijuana law, passed overwhelmingly by voters in 2008.

A third bill passed by the House would create a system to track cannabis from seed to sale across the state. All three bills picked up 95 or more votes. The House includes 110 representatives, so the support was massive.

The bills must pass the Senate

That doesn’t mean the bills will become law, however. Similar legislation passed the House last year but stalled in the Senate, where sentiment toward MMJ is less positive.

Provisions in the bill include the following:

– Local communities could decide whether to allow dispensaries and commercial growers within their boundaries. This could effectively limit the shops to relatively small portions of the state, since many localities are vehemently opposed to medical weed.

– Regulate MMJ businesses in five categories: cultivators, processors, dispensaries, testing laboratories, and shippers. Each category would be subject to licensing fees established by the Michigan Licensing and Regulatory Affairs Department.

– Permit sale of non-smokeable forms of the drug, including edibles, oils, and THC pills.

Excise tax has been disputed

The taxes are the only part of the legislation that has drawn much opposition from the medical marijuana camp. The excise tax was originally set at 8 percent but was dropped to 3 percent after a push-back from the cannabis industry. The Michigan Cannabis Development Association and other groups say they support the bills.

“By passing this landmark legislation, the Michigan House today is taking a historic step toward better protecting medical marijuana patients and providing local businesses and communities with a clear, consistent framework to make sure everyone across Michigan plays by the rules,” said Willie Rochon, secretary of the association.

State Rep. Jeff Irwin, a Democrat, said medical weed shouldn’t be taxed because other types of medication, such as prescription drugs, aren’t subject to taxes. But he said he supports the legislation and considers it a reasonable compromise.

“I find the solution to be imperfect, but a good compromise,” Irwin said. “I hope the legislature will ensure that this evolving market is something that we continue to get right.”

Rep. Mike Callton, a Republican and an author of the bills, said the new legislation should face an easier time in the Senate this year.

“This year, we have addressed what made it stall last year,” Callton said, referring to strong opposition from police groups. They have been more closely involved this time around, he said. “They’ve been at the table. They realize we need something.”