Medical Marijuana is quickly becoming a booming industry – however, there are still many places that, despite voter-passed regulations, are denying MMJ patients access to their medicine. The chaotic patchwork of regulations that makes it possible to sell medical marijuana in one California city but not the next appears to be making its way back East, if only temporarily. Massachusetts voters legalized medicinal marijuana by a wide margin in November. But some cities have been doing their best to deny medical marijuana users’ rights.

Soon after the election, Wakefield, Mass., opted to zone future dispensaries out of town. State Attorney General Martha Coakley stepped in and overturned the zoning rule in March, saying it conflicted with the marijuana law passed by voters statewide. Wakefield has appealed. In response to the ruling, many cities in Massachusetts have enacted one-year moratoriums on medical cannabis dispensaries instead. This gives municipalities time to come up with appropriate zoning policies, but some towns clearly hope to find a way to make the moratoriums permanent. 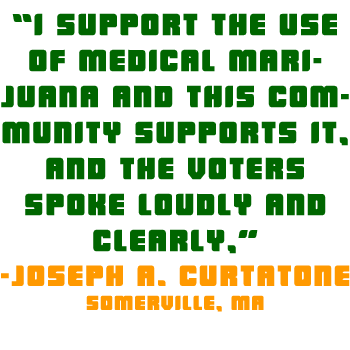 A number of other cities in Massachusetts have attempted to ban medical marijuana dispensaries outright: Peabody, Melrose, Reading and Lynn, all on the North Shore. Those prohibitions appear unlikely to stand in light of Coakley’s ruling, which held that allowing one ban would negate the effect of the entire medical marijuana law by opening the door to bans everywhere in the state. In Lynn, the City Council overrode a veto by the mayor in February to prohibit dispensaries entirely. Now, however, they’re setting aside industrial space. Peabody, which passed a ban in January, has agreed to accept applications for approval by its council, according to The Globe. Melrose has also backed away from its dispensary ban, turning to a moratorium instead. In total, a dozen Massachusetts towns have been granted moratoriums from the state, while nearly 40 others have applied. Some are using the delay as a tactic to hold off dispensaries, but others are developing genuine zoning strategies in the meantime. Somerville, a Boston suburb that borders Cambridge, has enacted a moratorium, but the city’s mayor told The Globe dispensaries will be welcome. The same is true in Newburyport, on the North Shore, and a number of other towns throughout the state.

Nonetheless, the mish-mash of regulations from one city to the next presents problems for patients and threatens to choke the few cities and neighborhoods where medical marijuana dispensaries will be allowed to open. Similar troubles have plagued California, where dozens of cities and counties have zoned legal dispensaries out of business. As a practical matter, legal medicinal weed is now available only in a handful of liberal strongholds such as Los Angeles and the Bay Area, while most conservative parts of the state have banned it. It remains to be seen whether Coakley’s decision can prevent that patient nightmare. She doesn’t have statutory authority over the bylaws passed by cities and towns in Massachusetts, but many appear to have accepted her conclusion.

Medical marijuana services may be open to Massachusetts patients by late December. A patient must have a debilitating medical condition and must receive written certification from a doctor. Dispensary applications will be reviewed over the next several months.