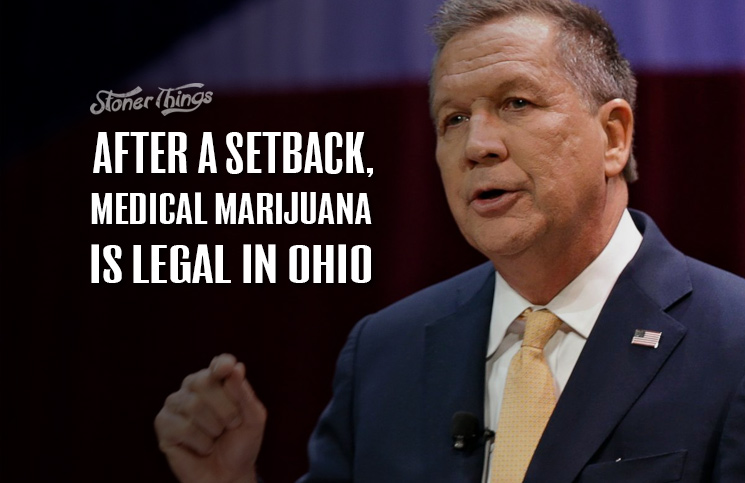 Just days after activists in Ohio abandoned their efforts to legalize medical marijuana by public referendum, Gov. John Kasich finished the job for them. 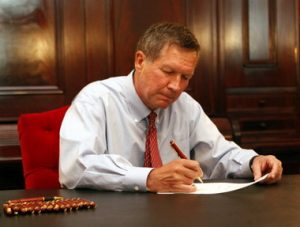 Kasich, a Republican who lost to Donald Trump in the Republican presidential primaries, signed legislation in June that creates a new system for the legal cultivation, distribution, and use of marijuana as medicine. The program itself won’t be on the ground for at least a year, and it could be longer than that before patients have access to pot.

The law also isn’t terribly friendly to tokers. It prohibits home grows and smoking, meaning patients must vape, eat, or consume cannabis in some other way. Kasich signed the bill June 8.

Just days earlier, backers of a campaign to approve medical marijuana by way of a ballot initiative announced they were withdrawing their financial support. The Marijuana Policy Project, the largest pro-cannabis group in the country, said its money could be better spent elsewhere, since it appeared increasingly likely Kasich would sign the lawmakers’ bill after it passed the Ohio Legislature.

Ohio and 24 other states now allow “whole-plant” medical marijuana, including parts of the plant that contain concentrated THC, the chemical that gets users high. More than a dozen other states allow medical use only of CBD, a non-intoxicating chemical in cannabis. Four states and the District of Columbia have legalized marijuana for any adult use.

That law puts most of the details in the hands of the Ohio Department of Commerce, the Ohio Pharmacy Board, and the Ohio Medical Board, along with a new bipartisan advisory panel.

Adult patients with any of 20 listed conditions may be eligible for marijuana treatment once the program is up and running. They include HIV/AIDS, epilepsy, cancer, post-traumatic stress disorder, and intractable pain. Patients have the right to petition the medical board to add specific disorders to the list.

Rules for prescription have yet to be addressed

The rules for prescribing have yet to be written, but a patient with a listed condition will have to obtain a written recommendation from a medical doctor. Physicians will be regulated and educated by the state.

It won’t technically be legal for patients to medicinally use cannabis until early September, 90 days after the secretary of state officially files the new law. And until the first dispensaries open at least a year from now, there will be no legal source for cannabis anywhere in Ohio.

Kasich’s signature closes the chapter on a tumultuous period in Ohio marijuana politics. Pro-pot advocates tried in 2015 to legalize the drug for both medicine and recreation but failed at the ballot box. That effort died in large part because its organizers used it to try to build a monopoly to benefit their investors.

The activists who pushed that campaign have since departed the marijuana reform scene in Ohio, leaving future legalization efforts to national groups such as the Marijuana Policy Project – and to the state officials who made medical marijuana legal this month.

Tell us: Should activists in Ohio have kept up their push for a medical marijuana initiative on the ballot? Leave a comment and let us know what you think.