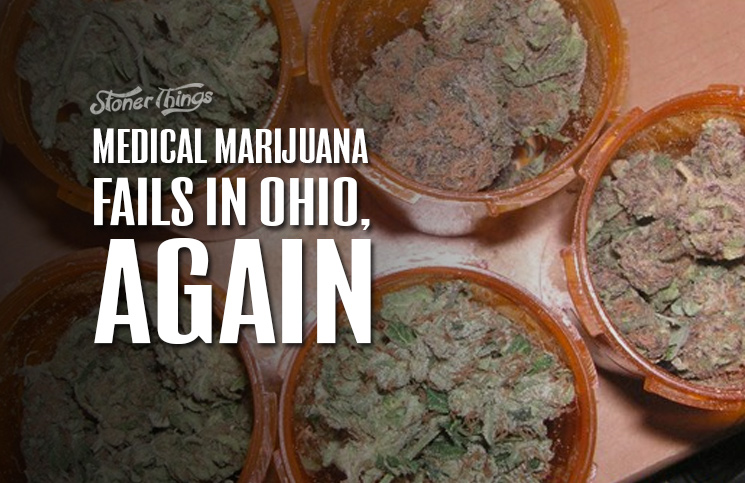 A second attempt to legalize medical marijuana in Ohio has ended with a whimper.

Less than a year after an earlier effort failed badly at the ballot box, backers of a 2016 follow-up abandoned their medical cannabis campaign, saying a recent vote by lawmakers made it a moot point. The Ohio Legislature voted in May to approve its own approach to medical pot.

The announcement means the state’s legislators, rather than its voters, will shape the details of medical marijuana throughout Ohio. That could lead to tighter restrictions, as similar approaches have in other states.

The Marijuana Policy Project, the largest national group lobbying for legalization of marijuana, announced with its local affiliate, Ohioans for Medical Marijuana, that it would end its push to legalize medicinal cannabis at the ballot box. The groups were in the process of collecting the 300,000 signatures required to put the question before voters in November.

MMJ rules will be decided by state legislators

Legalization advocates said they were surprised by the announcement. Just days earlier, Aaron Marshall, a spokesman for the reform campaign, had said the groups would keep pushing the initiative even if the legislature passed its bill. “Hell yes,” he said when a reporter asked the question.

But the lawmakers’ vote left the Marijuana Policy Project with an obvious choice: Either the group could pour more money into its Ohio initiative in hopes of tweaking the specifics of the state’s new policies or they could direct that cash toward states where the very future of MMJ is still in doubt.

Ballot drives are expensive, eating up millions of dollars. Last year’s failed effort to legalize marijuana in Ohio for both medical and recreational use cost $20 million before voters even made it to the polls – and then died there anyway. A continued push by the Marijuana Policy Project would have drained millions more, and to no apparent end.

“The reality is that raising funds for medical marijuana policy changes is incredibly difficult, especially given the improvements made to the proposed program by the Ohio General Assembly and the fact that the Governor is expected to sign the bill,” Brandon Lynaugh, campaign manager for Ohioans for Medical Marijuana, said in a news release.

The version adopted by the legislature, which should receive the signature of Gov. John Kasich soon, would legalize most medical forms of pot under the auspices of the Ohio Department of Commerce, the state’s Pharmacy Board, and its Medical Board. But the initiative would have allowed smoking and home grows, while the legislative bill would not.

Rather than smoking cannabis, patients would be forced to vape it, eat it, or take it in another form. These methods are not effective for all patients.

“Smoking dope and growing dope, that’s not an Ohio thing,” said GOP Sen. Dave Burke, who pushed the bill through the Ohio Senate. “That’s not medicine.”

Ohio’s version of MMJ would become available within 16 months once Kasich signs the legislation, Burke said. The law would allow Ohioans to buy and use marijuana in other states – but they can already do that, and it is a federal crime to bring the drug back across state lines, so the rule would not provide measurable relief to any patients.

Burke and his supporters took the announcement by the Marijuana Policy Project as a victory. They accepted medical marijuana begrudgingly, and then only because they wanted to stop outside groups from shaping state law.

“Marijuana Policy Project choosing to withdraw its ballot initiative is welcomed news,” said House Speaker Cliff Rosenberger, also a Republican. “But more importantly, it is an indication of the General Assembly’s willingness to listen and respond to the will of Ohioans.”