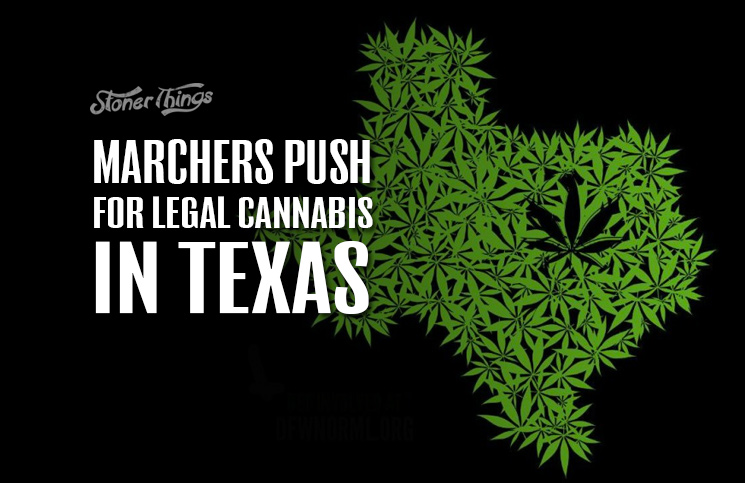 Hundreds of marijuana advocates marched in Fort Wayne, Texas, in early May, pushing to legalize the drug statewide for both medical and recreational use.

It was part of the annual Global Marijuana March, and it drew protesters from across the Dallas-Forth Worth metro region. Similar events occurred in Lubbock and other parts of the conservative state.

Marchers waved Texas flags with a marijuana leaf in place of the traditional lone star and carried signs reading, “Open your eyes. Legalize,” and “God made grass.” They chanted “we smoke weed” in unison as they marched.

“We want to see a change in our laws sooner rather than later,” said Shaun McAlister, executive director of the Dallas-Fort Worth chapter of NORML. “We are through with our tax dollars being wasted on prohibition.”

The Global Marijuana March, in its 17th year, brought out thousands of marchers around the world, all agitating for comprehensive cannabis reform. In Texas, advocates included veterans, doctors, business owners, students, and patients with chronic conditions that could be treated with marijuana.

Support for legalization is growing

Texas is a notoriously conservative state, but even there, support for legalization is growing. Recent polls show roughly half of voters oppose the idea, but a full 46 percent support it, a jump of more than 10 percent over the past four years.

Similar trends have been seen in other dark-red states, even in the Deep South. Voters who once shuddered at the idea of legal cannabis are quickly warming to the idea – in large part because of the drug’s clear medical benefit to many suffering patients.

Eric Espinoza of Arlington, Texas, is one of them. Espinoza suffers from cerebral palsy, a condition that causes chronic pain. He took addictive opioid drugs for years to manage the pain, the fatigue, and the spasms that go with the incurable disease. He lost his ability to walk. But marijuana would help him regain his health, he said.

“I eventually found there are far better alternatives to pharmaceutical drugs,” he said. “When marijuana is legalized, it will instantly improve the quality of my life and the lives of others. I will be able to experience the life I should have.”

Cannabis is banned in Texas for any use

Texas outlaws cannabis for any use. A 2015 law purported to legalize the drug for extremely restricted medical use but has had no practical effect. The law limits use to a non-intoxicating marijuana product known as CBD, which has only very limited potential for treating disease. But activists say it’s a sign the state could be moving toward eventual legalization.

Air Force veteran Mark Linday, who runs a Fort Worth company that builds plastics and other products out of plants, said he has to buy hemp from other states because Texas won’t let him grow it. Linday said legalization would contribute to a more environmentally friendly approach to business.

“We are not potheads,” he said. “We are not criminals. The marijuana movement isn’t just about smoking pot. It’s about an agricultural crop with a lot of potential that we are forbidden to grow.”