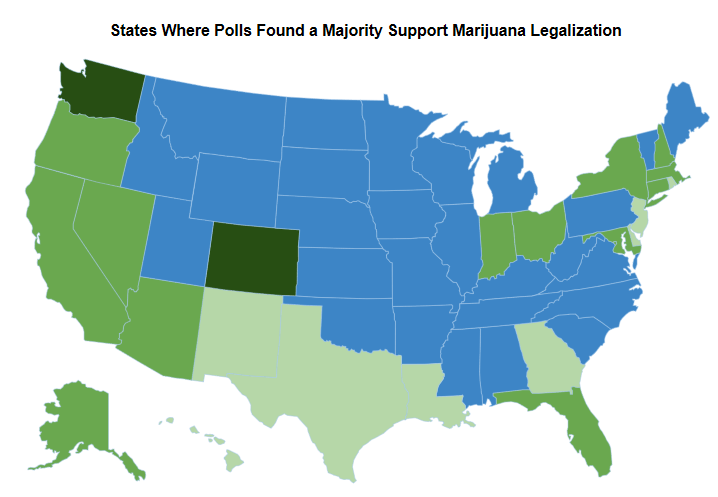 A new analysis of marijuana polling data shows most of the country still has a problem with the idea of full legalization, geographically speaking. But the country’s most populous states all support it, enough so that backing for legal weed tops 50 percent in national polls.

The pro-legalization group Just Say Now prepared a map of available polling data from all 50 states. The results demonstrate that most support for legalization is based in the West and Northeast.

There are pockets of pro-marijuana feeling elsewhere, such as Indiana, Ohio, and Florida. But the vast majority of the rest of the nation either opposes the idea or hasn’t been polled.

There are some surprising results. Texans, for example, back legalization, if only barely. The same is true of Georgians and Louisianans. On the other side of the coin, voters in deep blue states such as Minnesota and Michigan still oppose legal marijuana.

The results are highly fluid, however. In Michigan, for example, some polls show a majority supporting legalization while others find most voters are against it. The Just Say Now map is based on aggregated data.

Two of the most supportive states, Washington and Colorado, have already legalized recreational weed for adults over 21. Two more, Oregon and Alaska, could vote to do so as early as November.

Cannabis reform is on the horizon in several other pro-marijuana states. California probably will vote to legalize in 2016. Ballot initiatives are likely in Nevada, Arizona, and other states, while the drug could be legalized by legislation in states such as Rhode Island and Maine.

Proposals to adopt medical marijuana are also under consideration in several states. Florida, which strongly supports legalization and MMJ, will vote on medicinal cannabis in November. Minnesota Gov. Mark Dayton is close to signing an MMJ law in that state, where backing for reform is much weaker.

Several states that oppose legalization have nonetheless enacted laws allowing a restricted form of marijuana known as CBD oil. This drug is low in THC, the chemical that gets users stoned, and high in CBD, a chemical that helps patients with severe epilepsy.

Kentucky, Alabama, and Utah have passed laws allowing only CBD oil, as have Wisconsin and Mississippi. In all these states, either voters oppose legal weed or there is no relevant polling data.

Support for legalization in some states doesn’t reflect political reality. In Texas, for example, efforts to legalize recreational pot or even MMJ are considered hopeless long shots. The same is true in Georgia, where the legislature recently killed hopes for a CBD law.

At the same time, reform is already progressing in some states that don’t back full legalization. Medical pot is now legal in Montana, Michigan, and Illinois, and it will soon be legal in Minnesota, even though those states are all relatively soft on legal weed.