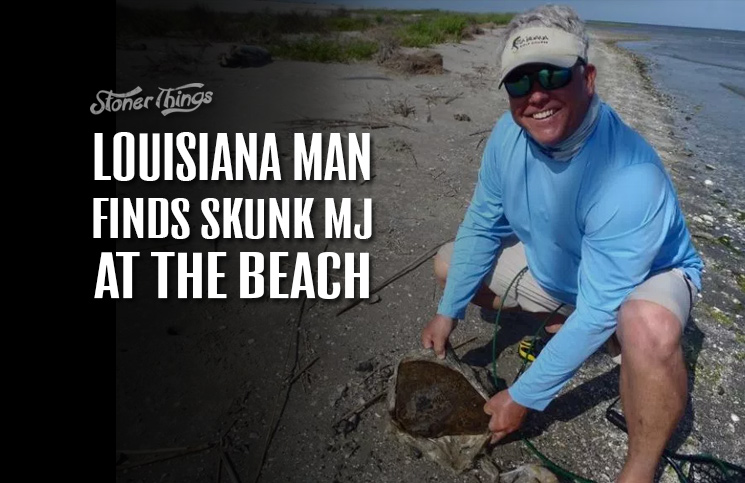 In Florida it’s known as “Square Grouper” – compressed packages of drugs that wind up on the beach. Perhaps not surprisingly, it’s pretty common in those parts.

Less so in Louisiana, but that’s where a local fisherman stumbled across a lost bag of marijuana in May. The cannabis apparently washed up after circulating in the local current for a very long time.

Capt. Theophile Bourgeois runs a charter fishing business along the Gulf Coast. Most summer days he flies a seaplane from Lafitte, La., to the barrier islands that line the state’s coastline. There he guides his clients toward the huge trout that bring them out to fish.

Bourgeois told the New Orleans Times-Picayune that he has frequently daydreamed about finding booty on the beach, perhaps pirate loot. But he never thought he’d come across commercial quantities of drugs.

He was leading a group of his clients along the backside of one of the islands when they spotted a rectangular package wrapped in plastic, sitting on the sand near the water’s edge. Bourgeois, no stranger to cannabis, said he knew almost instantly what it was.

He was right. The group cut the package open and found a block of skunky Mexican brick stashed inside. Not the sort of stuff smugglers would lose much sleep over.

Police declined to comment on the find, but Bourgeois estimated the block weighed as much as 20 pounds. It was highly compressed, he said, and had clearly been floating at sea for some time.

“It was old and waterlogged,” he said. “If it had been fresh, I probably would have (left). It was on the bay side, which meant it made its way through current and came around. It looked pretty damned old.”

The group called law enforcement anyway and gave them GPS coordinates to the marijuana. Police asked if there were any identifying marks on the package. “There was no labeling on it like, ‘Uncle Joe’s Pot,’ or anything like that,” Bourgeois said.

Asked by reporters, he declined to name the island where he found the marijuana, saying it would soon become infested with treasure hunters looking for free cannabis. “You’d have jet skis, inner tubes, hang-gliders, everything out there looking for the bag of weed,” Bourgeois said.

It was after he posted pictures of his discovery on Facebook that he learned the proper name of “Square Grouper” from his friends in Florida, he said. They may be used to this sort of thing, but Bourgeois still is not.