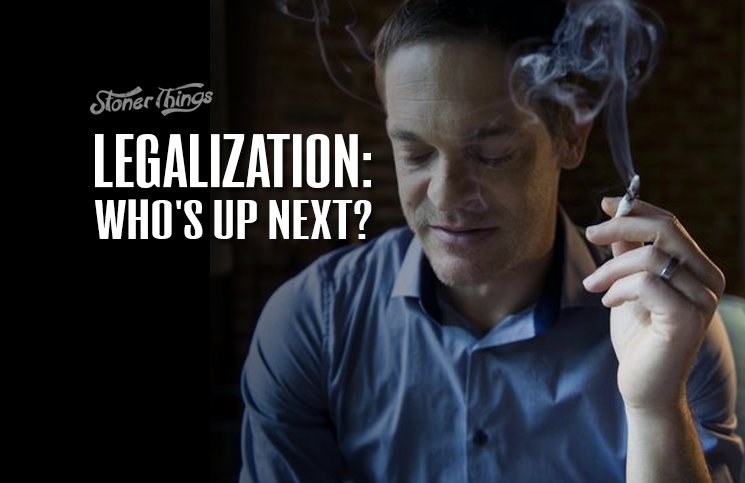 We all know the tally by now: As of this year, weed is legal for personal use in four states – Colorado, Oregon, Alaska, and Washington – as well as the District of Columbia.

That tells us where we are. But where, exactly, are we headed next? Which states are most likely to join the legalization bandwagon in the next few years? And what are the odds of a clean sweep?

According to 24/7 Wall St., a financial news blog, there are 11 states that appear to be ripe for legalization. Each of these places allows medical marijuana and punishes minor cannabis offenses with only small civil fines.

For obvious reasons, reform should have an easier path in these states. The leap from decriminalized recreational weed and MMJ to legal grass is relatively small, at least compared to states where marijuana is banned for all uses.

The blog’s list includes the following 11 states: California, Connecticut, Delaware, Maine, Maryland, Massachusetts, Minnesota, Nevada, New York, Rhode Island, and Vermont. Not all of these will legalize in the immediate future, but they’re mostly good bets.

California is the big prize, followed by New York, for the simple reason that more people live in those states than in any others. If both legalize personal use, it could mark the beginning of the end for prohibition, nationwide.

But other states are critical, too. A victory in any of Connecticut, Rhode Island, Delaware, Vermont, Maryland, Massachusetts, or Maine would officially bring legal weed to the East Coast. If reform succeeds in Minnesota, that would become the first Midwestern state to legalize.

Support for the idea is strong in almost all of these states – but not all. It’s relatively soft in Minnesota, for example, where medical marijuana is still struggling to get off the ground.

It isn’t just voter support that makes these states good targets. Nine of them have high rates of cannabis use by residents aged 12 and older, more than the American average of 12 percent.

If you’re a betting sort, put your heaviest money on California and New York. At least one legalization initiative will likely be on the ballot in California next year, and New York lawmakers are considering bills that would legalize pot there.

Rhode Island is also a strong contender on the East Coast, as residents there use more weed than Americans who live anywhere else. The push to legalize in Maine is also strong, as it is in Massachusetts. Vermont isn’t leading the pack, but the state’s liberal voting base means reform will come sooner or later.

On the other hand, Delaware, Maryland, and Connecticut face longer odds, at least within the next two years. The same is true in Minnesota, home of the 12 step industry, where drug policy reform typically gets a chillier reception.

Nevada is the only western state in the bunch, if only because every other western state with a left-leaning populace has already legalized. Wyoming, Utah, Idaho, Kansas, Oklahoma, New Mexico, Arizona, Nebraska, North Dakota, and South Dakota remain, but they aren’t likely to legalize anytime soon.