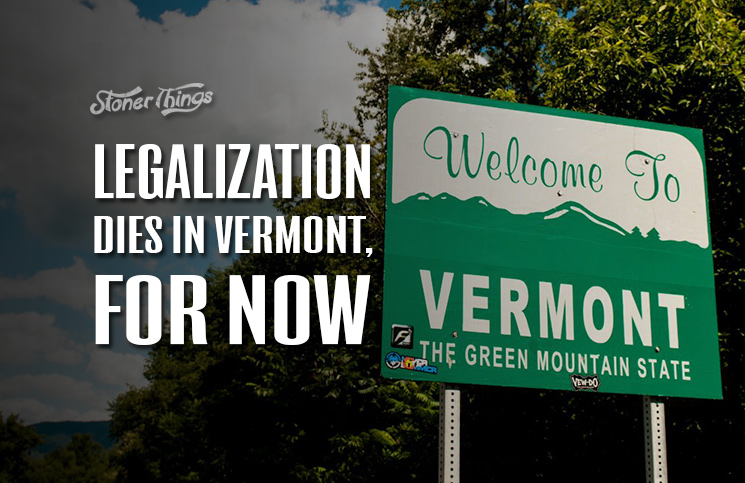 Hopes for legal marijuana have temporarily died in Vermont, thanks to a decision by state lawmakers to kill it.

The Vermont House voted in early May to reject a bill that would have legalized cannabis for recreational use. The state already allows medical marijuana.

The vote came as a major disappointment to reformers, who had hoped earlier approval in the state Senate would lead to full legalization this year. Success would have made Vermont the first state in the country to legalize cannabis by way of its legislature; other states have done so only by public referendums.

Victory also would have marked the arrival of legalization to New England. Washington, D.C., is the only region on the East Coast that allows legal marijuana for recreation.

But lawmakers instead voted 121-28 to kill the legalization bill, which Gov. Peter Shumlin had promised to sign. The legislation would have legalized cultivation and retail sale of cannabis, as well as possession and use of small amounts of the drug. It also would have imposed a tax on the industry.

Edibles would have been banned, as would home cultivation, facts that would have made Vermont’s laws more stringent than those of the four states where pot is already legal: Washington, Oregon, Alaska, and Colorado. The first commercial stores would have opened in 2018.

The ban on home grows may be what ultimately killed the bill, according to several lawmakers who voted against it. One said that approach “is not the Vermont way.” But supporters of the legislation said it was time to move on after the long failure of prohibition.

“Constituents want to know, why do we sit and enjoy delicious Vermont beer and frown on cannabis use?” said state Rep. Christopher Pearson.

Another vote, scheduled for later in the month, would decriminalize marijuana possession and cultivation, allowing grows of up to two plants per household, subject only to small civil fines.

“I don’t think we want to be in the business of saying that someone who grows a plant for their own use should have a criminal record,” said Rep. Chip Conquest, sponsor of the decriminalization proposal.

But some lawmakers said even that approach is unlikely to pass. The compromise bill would establish funding for drug education and pay for continued studies on legalization, but it was delayed when House leaders said they probably couldn’t get enough votes to push it through.

Unfortunately, the House vote came just as the year’s legislative session was drawing to a close. That means no legalization bill will come up again until next year. Reformers complained lawmakers were denying reality.

“I believe legalization is coming to Vermont,” Conquest said. “I think, because of what’s happening in other states and other countries and because of the nature of Vermont, there’s a very good chance that we will be considering legalization for marijuana in the very near future, and I think we should prepare for that.”

A separate bill, which would have put a non-binding legalization referendum before voters, was also killed in the Vermont House.