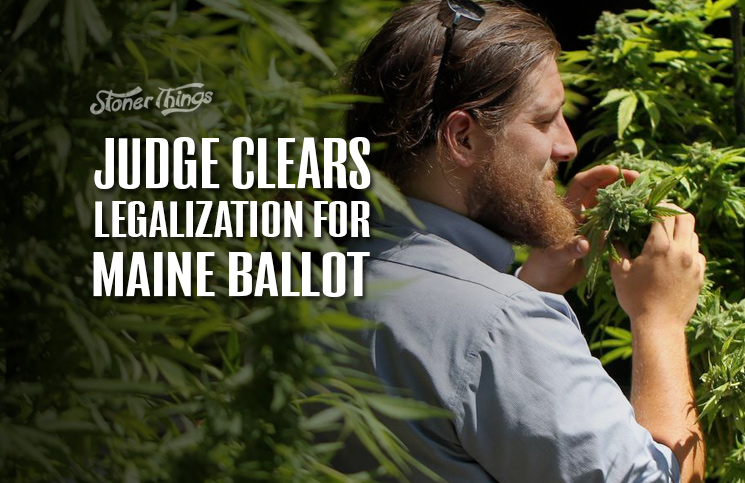 Efforts to legalize marijuana are moving forward in Maine thanks to a ruling handed down in April.

The cannabis reform campaign, launched last year, was almost run off the rails in March, when Republican Secretary of State Matthew Dunlap tried to block it. Dunlap claimed the initiative’s proponents had failed to collect the 61,000 voter signatures required to put the question on the statewide ballot in November.

But a state judge ruled Dunlap’s reading of the law was unreasonably narrow and burdensome under Maine’s constitution. The legalization petition, the judge ruled, was improperly blocked.

“We are extremely pleased with the court’s decision to send our initiative back to the secretary of state for re-review,” said David Boyer, head of the Campaign to Regulate Marijuana Like Alcohol. “As was the case when we submitted our signatures to the secretary of state originally, we know that a sufficient number of registered voters signed the petition to qualify for the ballot. So this re-review should now be a mere formality. Once the secretary of state’s office has completed its work, we look forward to launching the formal part of our campaign and educating Maine voters about the benefits of regulating marijuana like alcohol.”

Attempts to use technicality to invalidate votes

Dunlap, an opponent of legalization, tried to use a technicality to invalidate nearly half of the 100,000 signatures Boyer’s group submitted. Dunlap said the signature of a notary public who certified those signatures didn’t match a signature on file with state officials.

State law requires that each petition be signed by both the activist who circulated it and a notary who delivers an oath to the circulator. The oath is given under penalty of perjury.

Dunlap claimed “it was not possible for us to determine that the commissioned Notary Public whose name appeared on these petitions actually administered the oath to the circulatory of those petitions.” Roughly 17,000 signatures certified by the notary were rejected, even though a handwriting expert confirmed all the signatures were typical of someone signing multiple documents in a hurry.

Justice Michaela Murphy of the Maine Superior Court ruled that Dunlap “committed an error of law by applying a vague, subjective and/or unduly burdensome interpretation” of laws requiring a notary public to “sign by producing that notary public’s official signature by hand in the same form as indicated on the notary public’s commission.”

In a naked attempt to stop legalization, Dunlap interpreted that statute to require a near-perfect “match” between the petition signature and the official signature submitted by the notary. And instead of examining each signature by the notary, he simply invalidated every petition the notary signed.

The law “could also be read to mean that in the absence of any evidence of fraud, it is assumed that a Notary’s signature appears ‘in the same form’ as indicated on the Notary’s commission,” Murphy ruled. “While the State of Maine has a compelling interest to ensure that all petitions submitted for consideration in a direct initiative are valid, requiring a Notary’s signature to appear identically on every petition signed is unreasonable and abridges the Constitutional right to initiative.”

If the petition makes the ballot, voters in Maine could make the state one of the first to bring legal marijuana to the East Coast.