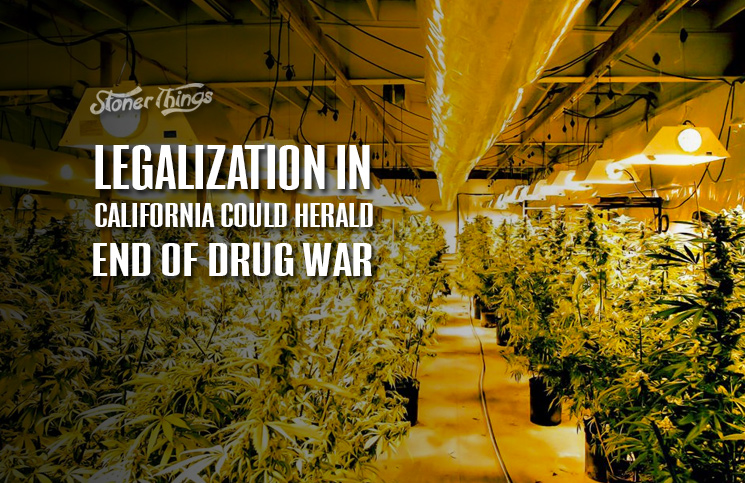 Almost everyone with a good understanding of events in California agrees: Voters there will legalize marijuana in the November election.

Sixty percent of registered voters support the idea, according to recent polls, a figure that translates into almost certain victory for legalization proponents. The group behind the ballot initiative, led by tech billionaire Sean Parker, has raised more than $3 million to push the proposal, which recently cleared the final barrier to appear on the statewide ballot Nov. 8.

But assuming everything works out and the initiative passes, what would that mean for the rest of the country? And what effect would it have on the future of the so-called drug wars?

The ‘heaviest domino’ yet to fall

If legalization happens, California stands to become the world’s largest legal cannabis market. That alone could push the United States permanently toward ending prohibition from coast to coast. Rolling Stone describes it as the “heaviest domino” yet to fall, the piece that could ultimately end the disastrous war on drugs.

The Golden State is home to 10 percent of the American population, with more people living in the Los Angeles basin alone than in Washington, Colorado, Oregon, Alaska, and the District of Columbia, the five places that have legalized marijuana so far.

And with the sixth largest economy on the planet, California could serve as the ultimate political laboratory, proving to the rest of the country that legal cannabis can work on a national scale. The state could also demonstrate the financial benefits of legalization, giving other places incentive to enact reform.

Since legalizing pot along with Washington State in 2012, Colorado has served as the national model for reform. Oregon and Alaska, which legalized two years later, largely followed the Colorado approach. The same was true in Washington, D.C. But the path California ultimately takes is likely the path other states will follow. The Golden State legalized medical marijuana in 1996 and has been the leader in all things cannabis ever since.

“It really is the state that wags the tail of the nation, so if California’s 55 senators and representatives in Congress were to be in favor of legalization, then it would be a total dynamic change,” said Allen St. Pierre, executive director of NORML. No other state, St. Pierre said, “has enough national sway so as to be the template for the rest of the country where possible.”

Lynne Lyman, California state director of the Drug Policy Alliance, said legalization there could force even the federal government to end prohibition. Marijuana remains illegal for any use under federal law, despite the various state laws that allow it for medicine or recreation.

“We see California as a tipping point to end federal prohibition,” Lyman said. That’s because legalization in the state would leave a substantial plurality of Americans living in states where cannabis is fully legal, while a large majority would live in places where the drug is allowed for medical use. The effect of reform on drug traffickers should also prod Congress and the executive branch to lift the cannabis ban, she said.

“Colorado has begun to undermine the marijuana cartels, but I think [legalization] in California might cut their legs out from under them,” Lyman said.

What’s your take: If California legalizes, how long will it take for the rest of the country to follow suit? Leave a comment below.