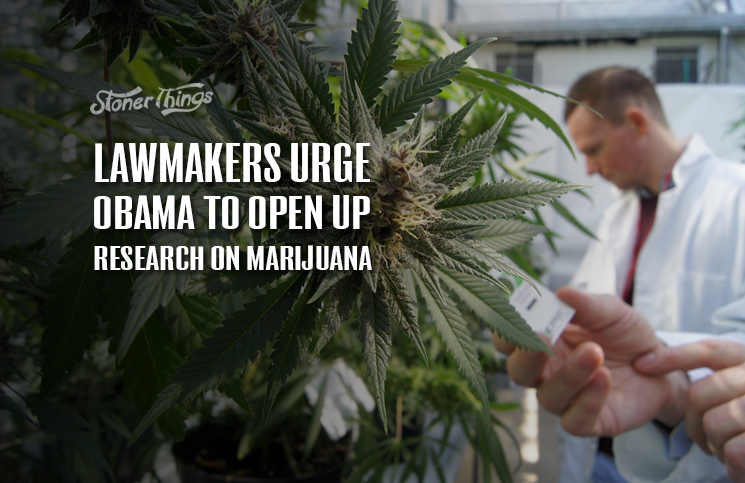 More than two dozen members of Congress on both sides of the aisle have asked President Barack Obama to lift the federal ban on positive marijuana research.

A bipartisan group of 26 senators and members of the House of Representatives sent a letter to Obama in April seeking to end restrictions that make it nearly impossible for scientists to investigate the benefits of medical cannabis. The letter was drafted by the office of Sen. Kirsten Gillibrand, Democrat of New York.

Gillibrand and her fellow lawmakers urged the Obama administration to allow the debate on marijuana and its medical uses to move forward based on scientific evidence. The American people have seen enough baseless propaganda on the issue, they said.

“As states have attempted to expand access to medical treatments for their citizens, the federal government has a responsibility to act in a manner that allows patients to benefit from research on those treatments,” the letter says. “Until we have comprehensive scientific research on the medical risks and benefits of cannabis and its derivatives, we will continue to debate this issue on the basis of outdated ideology instead of modern science.”

Dropping marijuana from schedule 1 of CSA

The letter is part of a larger push by many members of Congress to reschedule marijuana under the Controlled Substances Act (CSA) of 1970. The DEA is currently reviewing a separate petition that seeks rescheduling, and the agency will likely issue a response by July.

It’s unclear which way the anti-drug agency is leaning on that petition, but without a push from Obama, it remains highly unlikely DEA officials will reclassify cannabis. The drug is listed under schedule 1 of the CSA, a category of substances banned for any use. Other drugs on the list include heroin and LSD.

Gillibrand’s letter calls on the administration to instruct the Department of Justice to “conduct a fair and transparent review of Schedule I restrictions on medical cannabis” and to “end the DEA-mandated monopoly” on legal marijuana cultivation.

Because cannabis is banned under the CSA, the DEA allows only a single farm for research purposes. The site, run by the National Institute on Drug Abuse (NIDA), is located in Mississippi and produces only a fraction of the marijuana needed to satisfy scientific demand. And while the DEA is friendly with researchers studying the dangers of cannabis, the agency makes it extremely difficult to study its benefits.

Marijuana advocates have been seeking a rescheduling for decades, to no avail. The DEA has repeatedly refused to seriously consider a change in the CSA that would make it easier to research the drug and prescribe it legally for medical uses. Though many states now allow medical cannabis, the federal government still prohibits it.

The lawmakers who signed the letter said they’re skeptical the DEA will change its position this time around, and they have good reason. The agency remains rock-solid in its opposition to drug policy reform of any kind, in large part because such change would rob its agents of a huge source of revenue.

“Given previous issues with transparency in the scheduling process, we request that public hearings also be held to allow researchers, doctors, and patients an opportunity to inform this decision in an open, transparent manner,” the letter says.

The lawmakers also demanded that the DEA and NIDA increase federal pot production and open their supply to a wider array of scientists.

“We request that you direct the DEA Administrator to eliminate this barrier to research and grant additional licenses outside of the NIDA drug supply program to provide a supply of cannabis which is adequate to do medical research,” the letter says.