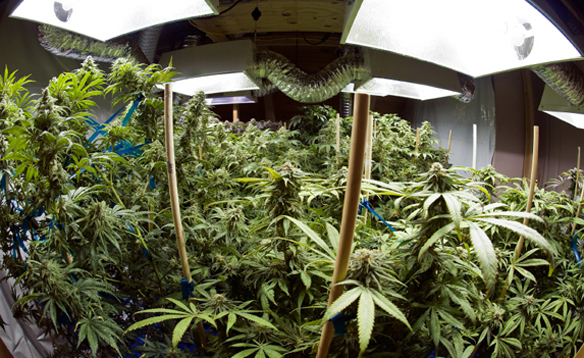 The Hollywood Madam has a green thumb. Heidi Fleiss, the notorious madam behind a famed Los Angeles prostitution ring, was busted in Nevada with almost 400 marijuana plants growing around her home.

Fleiss is charged with possession, possession with intent, paraphernalia, maintaining a residence where drugs are sold and conspiracy to violate the state’s controlled substance act.

But she has an explanation: She was growing it to sell to a collective in Las Vegas and planned to get a license. She planted too many seedlings and planned to destroy some of the smaller plants.

An officer of the Nye County Sheriff’s Department found the plants in early August when he went to Fleiss’s home to serve an arrest warrant on another woman. When the officer found a door was open, he entered the home and walked to the backyard, where he found more than 150 plants.

When Fleiss arrived shortly after, police searched her house and her guesthouse, finding another 224 plants. They also found grow equipment and chemicals.

Sheriff’s officers decided not to arrest Fleiss at the time becuase she owns exotic birds worth $200,000 and because she cooperated with the investigation.

Nevada is one of 20 states that allow medical marijuana. Until this year, the only way for patients to get pot was to grow it themselves. But a new law allows for collective dispensaries, which can grow weed and sell it to patients. These pot shops must be licensed and regulated by the state.

The dispensaries were added as part of a series of reforms to the state’s medical marijuana law. Possession amounts were increased as well.

Who Is Heidi Fleiss?

Fleiss rose to fame during the early 1990s, when her L.A. brothel and prostitution ring became the subject of tabloid headlines around the world. She was arrested, tried and served 20 months of a seven-year federal sentence for tax evasion.

After her release, Fleiss became something of a low-end media personality. She occasionally appears on Fox News programs and writes a column for Maxim magazine. She appeared on Dr. Drew Pinsky’s Celebrity Rehab.

She briefly planned to open a brothel in Pahrump, Nev., where she lives, called “Heidi Fleiss’ Stud Farm,” but that plan fell through. Whether her future business plans will continue to include pot farming remain to be seen.