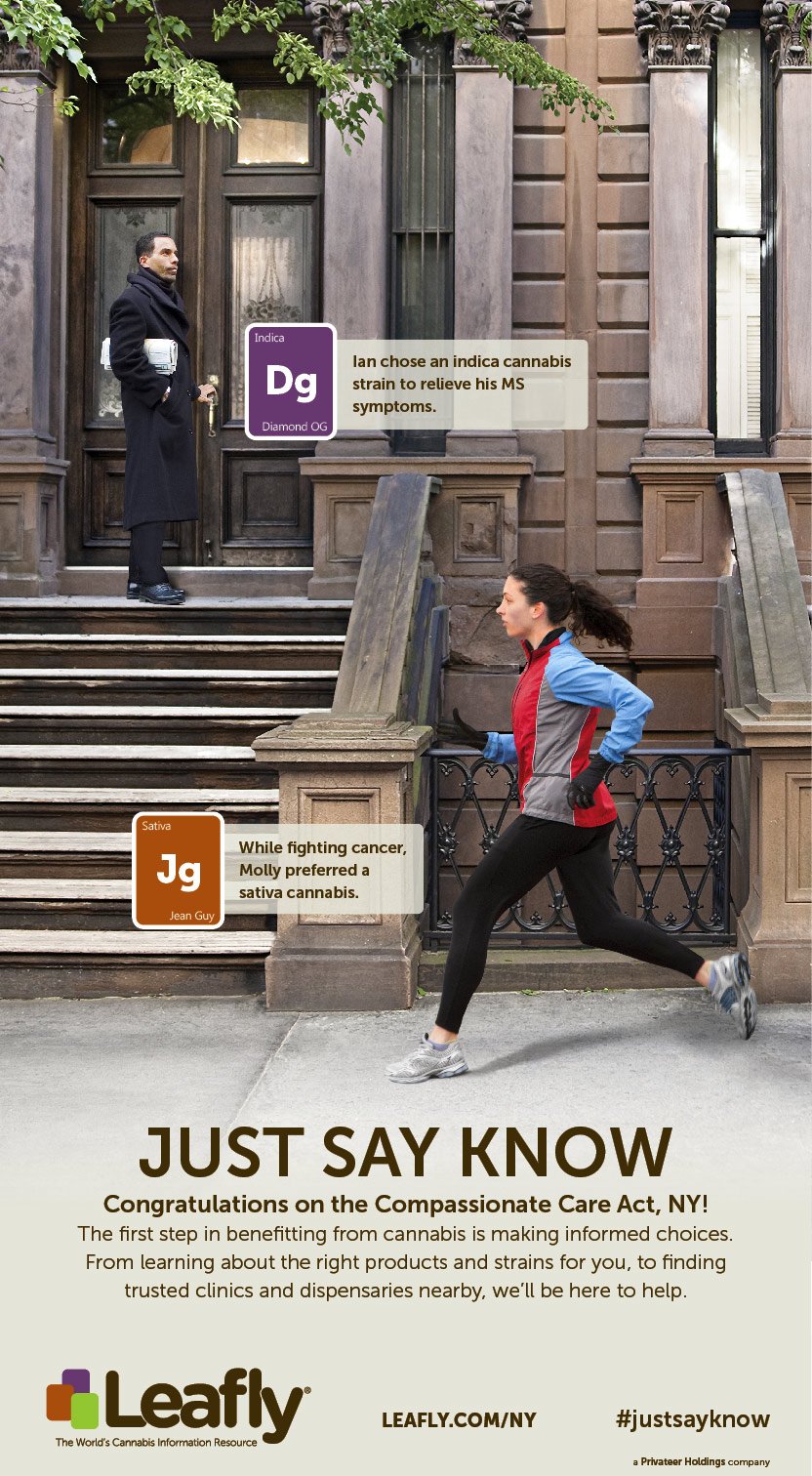 The Gray Lady published dueling full-page ads by cannabis advocates and their opponents in early August. The ads came in response to a six-day editorial series in the paper calling for national legalization of the drug.

Leafly, a website that helps users and patients find the right strains from the right providers, took out an ad in the Times Aug. 3 promoting its cannabis-related services. The same day, the most prominent anti-weed group in the country bought an ad portraying legalization as a gateway to “big marijuana,” which the group compares to Big Tobacco.

“The legalization of marijuana means ushering in an entirely new group of corporations whose primary source of revenue is a highly habit-forming product,” the ad says. “Sounds a lot like another industry we just put in place. Many facts are being ignored by [the Times] and other new organizations.”

The Leafly ad features a woman running down a New York City sidewalk past a man entering his building. The ad says the woman uses a sativa strain to fight cancer symptoms while the man prefers an indica to relieve his multiple sclerosis.

“JUST SAY KNOW!” the ad reads. “Congratulations on the Compassionate Care Act, NY! The first step in benefiting from cannabis is making informed choices. From learning about the right products and strains for you, to finding trusted clinics and dispensaries nearby, we’ll be here to help.”

Both ads come in response to a series of editorials by the Times that ran in late July. The newspaper called for full national legalization so states can make their own decisions about marijuana.

The paper’s position wasn’t exactly groundbreaking: Legalization became a mainstream topic a long time ago. But the editorials demonstrate just how mainstream legal weed has become.

Project SAM (Smart Approaches to Marijuana), a prominent national group that fights against legalization, paid for the anti-pot ad. The group is headed by Kevin Sabet, a longtime lightning rod in the cannabis debates. Former U.S. Rep. Patrick Kennedy helped found the organization.

SAM opposes legalization for several reasons, but the ad focused on Sabet’s claim that the marijuana industry will be overrun with large corporations pushing their product on vulnerable people – all evidence to the contrary.

“In the marijuana business, the values of the flower children have been quickly replaced by the values of Wall Street power brokers,” Sabet said in a news release. “We’re on the brink of creating the next Big Tobacco. We feel like this is an important message most Americans have not considered.”

The SAM ad features the body of a man in a business suit with the image of a hippie’s head superimposed over his. The ad says the head represents “perception” while the body is “reality.”

SAM directs users to its website, GrassIsNotGreener.com, an amusing but doomed tool designed to scare people off weed. The site lists several highly questionable “facts” about the drug, including the old canard that today’s cannabis is “4 to 5 times stronger than that of the 1960s and 1970s.”

That simply isn’t true. Some strains of marijuana are stronger than the strains available 40 to 50 years ago, but most are not. The only real difference between then and now is that people now seek out stronger pot because they’re better informed than stoners of the past.