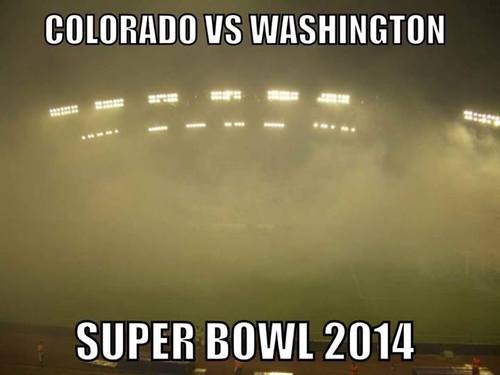 As if there wasn’t enough to love about Super Bowl XLVIII already. Both teams beat their rivals in the conference championships in the best way possible: by outplaying seasoned competition. The Broncos and the Sea Hawks are genuinely well-liked teams across the country. And they’re both universally adored by their hard-partying local fans. 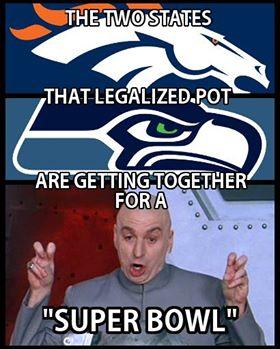 And then there’s this: Marijuana is now legal in the two states from which these teams hail. The names are already flying: The Bong Bowl, the Salad Bowl, the 420 Bowl, the Super Spliff . . .

Sadly, fans won’t be able to smoke up during the game at Met Life Stadium in New Jersey – where only medical cannabis is legal. But the matchup between Colorado and Washington is sure to encourage more than a few home viewers in those states (and plenty of others) to engage in some half-time “entertainment.”

Everyone but the narcs seem to be getting in on the fun. Greenworks MMJ dispensary in Seattle is selling a special, top-notch strain called the 12th Man, named after the legendary decibel level of Sea Hawk fans, whose volume is considered to add an extra “man” to the field.

Twitter is abuzz with proposed names for the face-off: the Weed Bowl, the Chronic Bowl, the Silver Haze Bowl, the “real” Bud Bowl. The lists are endless.

At the Seattle Post Intelligencer, they’re offering marijuana tips for the big game. From budtender Julie, who works at Greenworks, they got this nug of advice: Stick with sativa strains or sativa-dominant hybrids before and during the game.

Sativa is known for it cerebral daytime rush, while Indica, which you want to avoid, is known for its sleep-inducing qualities – the opposite of what you want on game day. Julie also recommends an edible or two to mix in with the nachos.

“If you’re one of those fans who likes to play sports as well as watching, check out a high CBD strain like Sour Tsunami or Cannatonic,” she wrote. “CBD has been prove to effectively treat and reduce inflammation and chronic pain. Some CBD strains have little to no THC in them which means you don’t have to deal with a head buzz or anxiety!”

On a more serious note, the Super Bowl is good news for legalization advocates. Like so many other developments over the past few years, the game guarantees lots of news coverage of the issue – and given the novelty of legal pot, much of it will be positive.

Voters in both states, Washington and Colorado, legalized recreational weed at the polls in November 2012. The first retail pot shops serving all adults over 21 opened Jan. 1 to long lines, surging business and few problems. Stores should open in Washington in the spring.