Florida’s highest court will soon decide whether voters there can have their say on medical marijuana.

Justices of the state Supreme Court heard oral arguments Dec. 5 on both sides of the debate over MMJ. Backers of medical pot, led by Orlando attorney John Morgan, squared off against opponents, led by Florida Attorney General Pam Bondi, a Tea Party Republican.

Arguments focused on a 74-word summary used to describe the proposed constitutional amendment on the ballot next fall. The Supreme Court must determine whether the ballot language is constitutionally valid – in other words, whether it would be misleading to voters.

Bondi and her political allies insist it would. The proposed ballot summary reads:

“Allows the medical use of marijuana for individuals with debilitating diseases as determined by a licensed Florida physician. Allows caregivers to assist patients’ medical use of marijuana. The Department of Health shall register and regulate centers that produce and distribute marijuana for medical purposes and shall issue identification cards to patients and caregivers. Applies only to Florida law. Does not authorize violations of federal law or any non-medical use, possession or production of marijuana.”

“You don’t even have to have a disease to get marijuana,” Winsor said.

That’s hardly unique to Florida, however. Most if not all states with medicinal cannabis allow its use to treat the the nausea and vomiting that result from radiation therapy and chemotherapy – a treatment aimed at side effects rather than the underlying disease.

Jon Mills, former state House speaker, Democrat and backer of the initiative, said voters would have no trouble understanding that the program was designed to treat both debilitating disease and conditions. The ballot summary refers to “diseases,” but the ballot title refers to “conditions,” Mills said, and it should be clear enough to voters.

The fight over medical pot is at one level exactly what it looks like: a liberal Orlando lawyer leading a legalization crusade against entrenched right-wing Republican drug warriors who believe the only response to any kind of drug use should be tougher prison sentences. 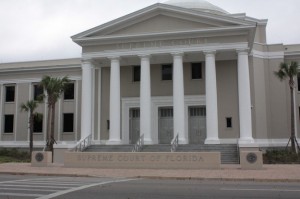 But it’s also a battle over control of state politics, with Bondi and her allies targeting Morgan because of his ties to their old enemy, former Gov. Charlie Crist, once a Republican, now a Democrat.

Crist, who works at Morgan’s firm, is running for governor again with hopes of unseating unpopular Tea Party Gov. Rick Scott. Bondi, Scott and others in their camp see Morgan’s campaign as an effort to help Crist – polls show more than 80 percent of Floridians support medical weed – and they want to keep it off the ballot.

“Everybody here knows that one day medical marijuana will be legal in Florida,” he said. “Whether it’s in 2014 or ’24, it’s going to happen . . . The people want what they want. At the end of the day the people are going to get what they want. And I would say to the politicians who are trying to thwart this, it could very well be a referendum on your re-election.”